I have a few pics that I wanted to post but with the craziness as of late I has been slacking..... Here are a few I wanted to share.... 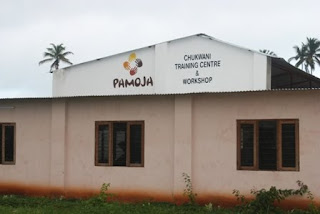 Check out the new sign on our school! Looks awesome right?
The story of getting it up there involved Jason and Rich outlining the logo and letters at night using a projector (collecting quite a crowd that were wondering what the Wazungus were up to), then not 10 minutes after they left it started down pouring and we were worried all the work would be wasted but the outline survived! Then Rich took one for the team by painting the logo and sign in the blazing sun. He had to come down midway because of heat exhaustion but after laying down and drinking a cold soda he was able to press on! Go J & Rich! We are getting there! 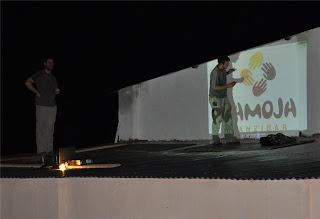 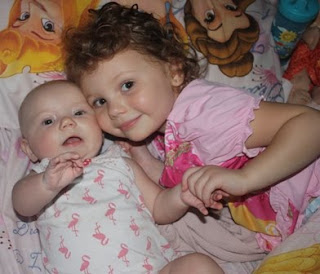 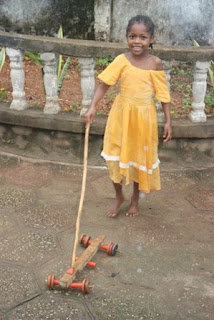 a little girl in our neighborhood shows off the car the kids made from scraps...pretty creative! 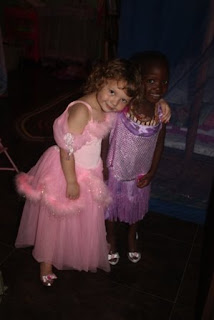 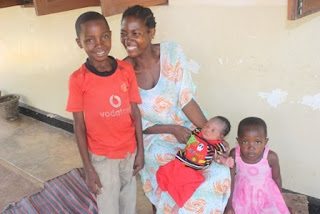 Our new Mlinzi family had their baby boy.....so sweet and now Evy is not the little one around here!

Our little is now 4 months old! We cannot believe it! More to come but she is rolling over.
I love this picture because it shows off her smiley little self. She has such a sweet personality and is always giggling at people.
Can you see what her shirt says? Jim & Rho brought that when they came and I love it-Made in Africa- hilarious!
Quick Evy story....one day this week I was cooking and Evy was happily playing on her mat. Taking a cue from Anni's old playbook she started crying and fussing for no reason. After checking she was not dying, choking, bleeding, etc I decided I needed to finish what I was doing and she could chill for couple minutes (ah, second borns...) Well, after a couple minutes she stopped crying and I was very pleased thinking "look at her learning to calm down herself." A minute later I came around the corner to find her GONE! I looked everywhere, at first thinking in my sleep deprived state if maybe I had put her elsewhere but then I began to panic for a minute until I realized Mama Mika was going about her chores outside with a smiling Evy in tow. She heard her crying and helped out...raising kids is so communal here! Evy definitely gets passed around and she is lovin' the attention. 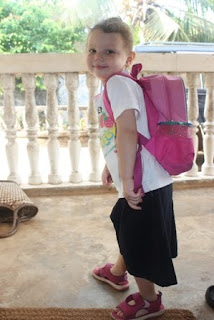 Anni ready to head out to school