go on girl...thwap it real good

Last night Paula (my fab team mate I recruited to join me) and I went to a Bday sherehe (party) for a good friend here. Her party last year was crazy big with a Tarab band, lots of food, and tons of people.We knew it would be a hug affair again this year. I will say it again people here LOVE to celebrate. Last year we were the first to arrive (an hour late) and the first ones to leave at almost 2am. This year I told her I was excited to go but that I would need to leave after only an hour or so because Evy would need me (J is an amazing Papa but alas has no boobs:) and since sleep is a rare phenomenon these days I could not party it up like last year. Yep, I am old.

We arrived over an hour late and as is typical we were some of the first people to arrive and the Bday girl was not even there yet. About 20 minutes she arrived and we helped her unload food and cakes and then waited while she changed into her party best. It really is crazy how dressed up some women get here at night for parties, almost like a bipolar sub-culture since during the day they are mostly covered and adhere to the cultural practices of the dominant religion. At night it seems like they break all norms and my friend even wore a strapless dress with enough glitter blue eyeshadow to put any 80's trend to shame!! I almost passed out as I have not seen that much skin here since a friend back home sent me a trash mag :) We had a great time chatting, learning some new Kiswahili words, and watching the hustle happening around us. About an hour after our "scheduled" departure time we finally left even though things were just getting started and many guest were just arriving. Before we left we were told to "subiri" (wait) for our to-go food and I wanted to get at least one dance in with my friend. The dancing to Tarab music here is a culture all it's own. It seems like ALL the women LOVE this music and know all the words the various songs. My favorite part of Tarab is the dancing and thwapping (that seriously is the best word to describe it) of money. You sorta sway back and forth while holding a mia tano bill (500 shillings, about 40 cents) and "when the spirit moves" you thwap it on the forhead of either a friend or most often the singer. I guess it is sorta like tipping them for the fabulous time you are having but it always makes me giggle truth be told. Sometimes I am brave enough to do the actual thwapping but many times I just hand the singer the money. Last night the band leader was wearing what can only be described as a "pimp suit" of all white with a sweet hat. When I went closer while dancing I noticed his tie had aliens all happily sporting Christmas hats!! It was awesome!!
here are a few pics Paula caught of the dancing & thwapping... 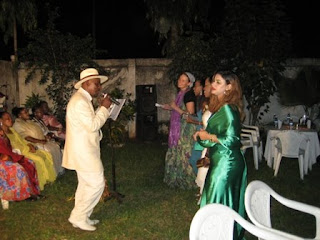 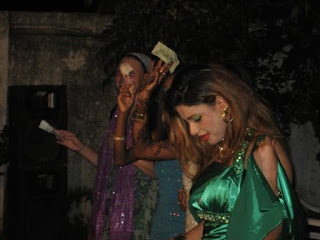 Mark said…
So you were supposed to go thwap that pimp guy on the head? Did anybody knock his hat off? I'm having trouble picturing this... I'm singing and a bunch of dancing ladies are smacking in the head with money. Maybe he should wear a garter belt.

I thought perhaps it wasn't a big deal for them to stop worrying about covering up completely if there weren't any men around, but that singer is of the male persuasion, so what's up with that?
22/4/10 10:28 AM