We just returned from a team retreat on the mainland (post to come soon but think 6 kids and 6 adults in one car :) and after recovering from one day with all us girls sick (pole for J) we are feeling better and back up and running! I have so much to catch up on!!!
here goes....
After returning to the island we quickly heard news that Anni's local school had moved. This was a huge bummer as it was right next to the vocational school we are building and only a couple minutes from our home. But the new location is much bigger and gives the school room to grow and include more primary grades which is great as we want to support the school's expansion since it is blessing so many families. The week after we returned to the island Mr. and Mrs. Kim showed us the new building and site but the bathrooms were not complete and the kids had to have class outside since the classrooms were not ready yet. They recommended we wait until after the official opening for Anni to return. When we visited we came bearing lots of goodies (some donated by many fabulous readers of this blog- thank you! ) and the teachers were so grateful to get all the great stuff. They especially LOVED the black baby baby dolls, the parachute, glitter and pom poms, and books. On our visit Anni was excited to see the new building and her friends but also had many reservations about returning to school. The day we finally went back there were many tears about going. It was a rough few days since we were very torn. We want Anni to enjoy living here and love the culture as we do but we also do not want to force her into situations that are too much for her. The tough line is knowing when a little push will stretch her and be good for her versus knowing when to pull back. I think every parent struggles with this; how to encourage your child to take risks that enable them to grow without compromising who they are or what they want. It can sometimes be harder since in our situation everything also has a cross cultural component. We prayed a lot and after talking to a few other moms who had similar situations after coming back after a long time away we decided she needed to go for at least a week and see how she would adjust. Her teacher and classmates were happy to see her return and although she was sobbing the first day and whimpering the second after getting home she proudly announced to me "Mama, I was crying but then I stop because I have fun." She has already showed off her new letter writing abilities to her teacher and has learned a few new songs and apparently a hilarious game involving colors and dancing (from reports after school). She also was won over when she learned the new PE shirts are pink for girls!! (turns out the transition was harder for me as her mama I guess). The school is now about 25 minutes away but the kids can take a bus from our neighborhood. We are driving her until we further investigate the bus situation but we are grateful she seems at peace at her school again.

Last week the school building was finished and they had an official opening ceremony. It really is a great facility and we were impressed they finished it so quickly (it was started and completed while we were gone). The ceremony was typically "African" as it is started almost 1 1/2 hours late, had tons of honored guests that all gave long speeches, lots of impromptu performances of sorts* , and it ended with take away packages of food (Anni's fav).

*one of which I was in charge of and only found this out when they announced my name to come up and lead the kids in a parachute game during the ceremony. I quickly handed Evy to a woman sitting next to me and jumped up. This produced beads of sweat on my face not only because it was sweltering in the sun BUT because the kids had NEVER even seen the parachute before and now I was about to lead them in Kiswahili in front of tons of people in a game they never had played. It actually went pretty well and it turns out that kids playing parachute games is fairly easy, even last minute!

Overall, it was a great ceremony and it was awesome to be a part of the celebration of the good work that has gone into the school. Our prayer is that this new school blesses the children and families here as it already has blessed us and will continue! Here are some pictures of the day.... 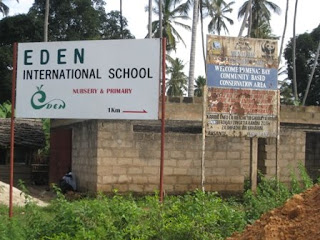 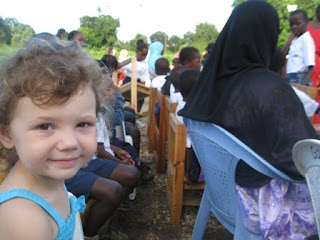 Anni being patient (or trying to be) during the LONG ceremony 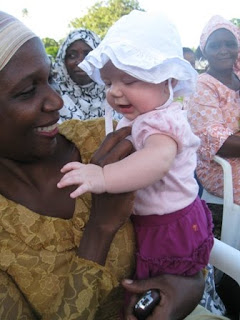 Evy was happy as long as she was being loved on! 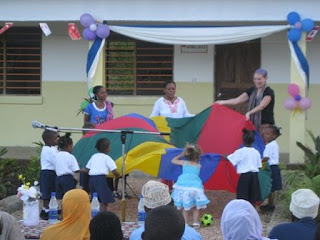 I was "in charge" of leading the kid's in Anni's class in a game...
they did pretty well considering they had never done it before! 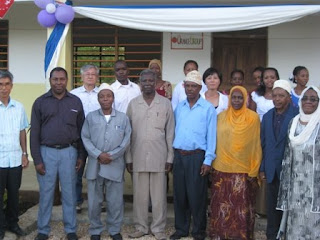 All the official leaders & guests 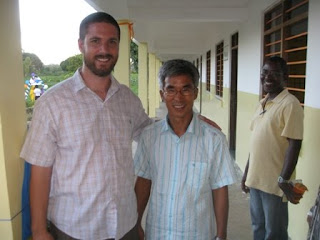 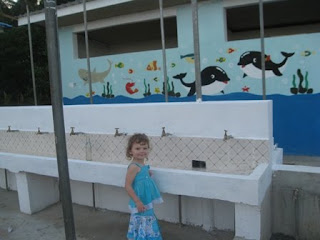 Anni shows off the new bathrooms and sinks to wash hands (the ones on top) and feet (the lower ones)! 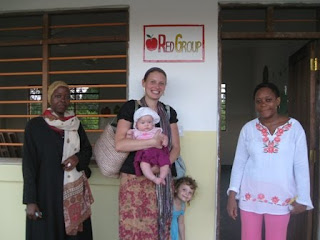 Anni with 2 of her teachers outside her new classroom!
Email Post
Labels: Anni school

Gma Rho said…
I agree - do NOT like the idea of a 25 minute bus ride for a 3 1/2 year old. Us grandmas have to stick together! But it is great the school was able to expand. Nice prospect for the schooling dilemma in the future.
17/4/10 8:46 AM