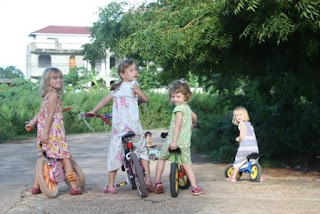 A few weeks ago Anni joined her friends to try out bike riding at a safe-ish practice driving circle near our school (it was built for driver's ed at the local college). We wanted to see if it was time to begin a hunt for a used bike here. The streets here are far too dangerous between the rocks, mud, massive pot holes, roaming cows, goats, and chickens. Add in the bikes, scooters, motorcycles, dala dalas, people, and cars and it is a med-a vac trip waiting to happen so she had never really tried a bike outside. Sure she has ridden the small tricycle we got her last year around our house but a real bike was very exciting. At least until she got on.

Now, I do remember learning to ride a bike and it was tough. I have always felt so gutted when I was not immediately great at something which for this first born has resulted in lots of disappointments. You would think I would be used to sucking at stuff by now. Learning to ride a bike is a rite of passage in kid world and it comes with a certain status and swagger. I remember that my brother; who has always managed to outshine me in everything physical, was whizzing by me on his "big bike" even though he was 2 years younger than me while I was still wobbling around with training wheels. I know I tried over and over getting up on the seat, afraid to go too fast, falling and feeling like I would never get it right. I did finally succeed but it was not easy. I am pretty sure there were tears involved and for Miss Anni there were a few moments like this..... 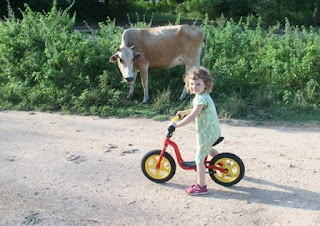 but mostly there was this..... 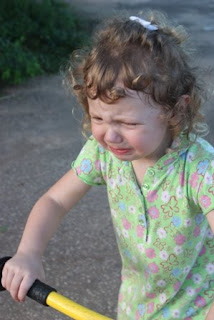 Poor kid. It was a rough first lesson and although she was mostly in tears she desperately wanted to be able to ride like her friends and even tried to convince us through sobs "no mama and papa, I have fun" when we suggested that maybe we should head home and try another day since this was supposed to induce happiness and not be akin to torture. Nope, she was miserable and going to keep trying...and crying. Definitely my child. Kids just do not get "you WILL get it" for them there is only the right now. She'll do it and I just know she will be an awesome biker chick! For now I think we will wait on a "big girl bike" and maybe try to find some training wheels for a small bike first. 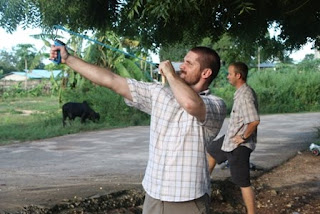 When Jason was not running behind a teary Anni or picking her up and kissing knee injuries he and Hans had a little too much fun aiming at the nasty ravens with the sling shot. Before you call PETA consider that these nasty bird's main gigs are stealing food and pooping on freshly washed and hung laundry! 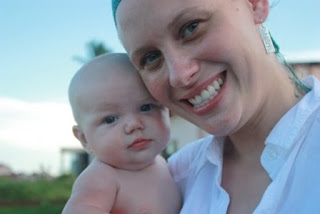 self take in front of our school.....sweaty girls ready to head home
Email Post
Labels: bikes

Nicole said…
I'm impressed Anni tried riding a bike without training wheels! Charlotte is STILL leary of her bike. But I know what you mean about brothers passing you up. Eli loves getting on Charlotte's big bike (not his tricycle) and "ride" around!
17/4/10 7:38 AM

Laura S said…
I am also super impressed Anni was going at it on a big bike without training wheels. Joshua JUST figured out how to ride a tricyle and doesn't seem anywhere near ready for the big boy bike yet.
18/4/10 5:44 PM

Bibi Ronnie said…
OH I REMEMBER THAT DAY SO WELL. YOU INSISTED WE TAKE OFF THE TRAINNING WHEELS AND THEN RUN BEHIND YOU SO YOU DIDN'T FALL. AND YOU HATED ROBBIE! I THINK YOU HIT HIM IN THE HEAD WITH THE BASEBALL BAT SOON AFTER THAT, DIDN'T YOU? :)
I KNOW IT WAS YEARS LATER, BUT THAT DAY MAY HAVE PLANTED THE SEED TO DO HIM IN!!!
18/4/10 9:46 PM