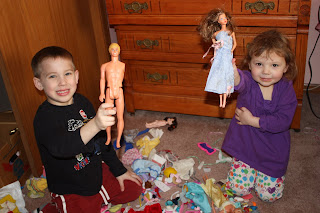 We leave for Africa in 16 days. This is just registering to me now. And mostly I feel ok about going back. Even excited as I really know that is where we are supposed to be right now. So I feel good except when I think there is still no power there and we have so much to do, lots of packing, and the hardest part: so many goodbyes to say AGAIN.
We are still in Iowa for a few more days and have been getting in as much time with the cousins and family as possible. This morning during an impromptu play date with the fearsome and fabulous 3some of Dillman cousins Annikah even drafted Silas into playing Barbies of yesteryear with her. We were informed that there was a wedding that was to take place between a brown haired barbie girl and a naked Ken doll.* The groom was not only chochote (a great Kiswahili word that can mean nothing or naked :) upon further gander he also only had one arm. When I asked Anni about his situation she quickly explained "he fall off his bike." Wow, that must have been one nasty bike accident! She also added later that his one missing limb could be because "maybe he is old." So I guess to my daughter a sign of aging could be one's limbs abruptly falling off without warning. When asked why she thought that was the source of his injuries she simply replied "I just think it to myself."
Bikes and getting old: scary stuff! 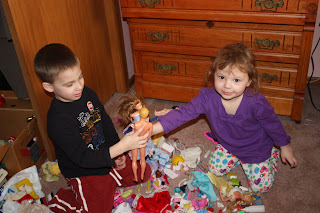 Jorie said…
This is hilarious! So glad you captured pics of the special wedding. Anni's explanations of the missing arm cracked me up.
1/3/10 10:39 PM

Mark said…
lol at this whole post, thanks for sharing. I guess the moral of the story is: old people shouldn't ride bikes.
5/3/10 1:02 PM