We are savouring some lasts (at least for a couple a years) before we head out tonight. We spent our last night with friends (who will soon be married without us :() enjoying some Mexican food and an impulse stop off at McD's for some Shamrock shakes (I get the 1/2 chocolate 1/2 shamrock...if you have the means I highly recommend picking one up). We were dedicated too as the first drive through we were told the shake machine was busted (to which all four of us replied with hardy "booing") As an aside McD's has swank-afied their shakes with a fancy cup, whipped cream, and a cherry....back in my day we had our McD's shakes in the glossy paper cup and we liked it. After getting our shake fix we sat in the car in my parent's driveway chatting and praying and mostly prolonging the inevitable "goodbyes for now." 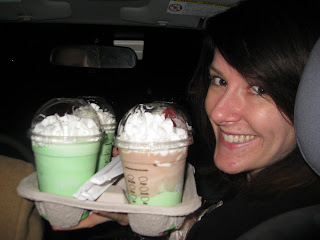 Then there was bedtime for one tired mtoto mchanga and laundry and Tivo'ed Lost for us. This morning Anni and I enjoyed one last run where wearing a sweatshirt is actually needed and sweating only occurs after some serious working out. This was followed by a ceremonial last trip to Target to return a few items that did not make the cut for the last precious pound-age. Anni stayed home with Bibi so J and I could enjoy sipping our last Starbucks and meandering the aisles one more time admiring the sheer fabulousness of choice, variety, and ease. I even busted out some dance moves to amuse myself and embarrass Jason (I was weirdly wired and I figure I will soon be starred at for just being white so I might as well spend my last day in the U.S. being starred at for being ridiculous). I danced like a fool nonstop until J would join me and thus stop my madness...have I mentioned I love my husband? Now a bit of emailing, a bit more packing (more like squeezing stuff in carry-ons....Anni is still pulling for one more pink dress up gown that used to be Auntie Katy's...we shall see although Papa thinks it does not look good). Next we are off to lunch with my Mom and Dad and lots of loading the car.....Ahh, the last of America....
Email Post
Labels: coffee last day target

jkww said…
thanks for making time for les and me last night! i love you SOOO much! it was great to savor some tex-mex and nostalgic shamrock shakes with you and jason. thanks for praying with us, and for your sweet gift.

Bibi Ronnie said…
FYI-The pink dress-up dress made it afterall. Thanks Katy for finding it and letting Anni borrow it. They also got a moved up to business economy so they could get a bed for Evy. God is already taking care of my special cargo.
17/3/10 8:52 PM