she is coming too!

Look what we got in the mail yesterday.... 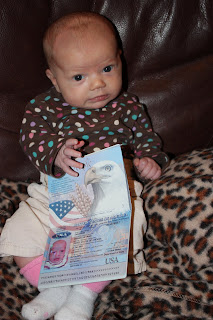 Yep, Evy can officially come to Africa with us now. Believe it or not many people actually ask if we are taking her with us. Crazy to me as I think it would be a bit traumatic to leave our kids for 2 years at a time! So, Yep, the girls are joining us on this adventure and we truly believe they are part of God's team there, that we are called as a family.
We were actually shocked and relieved to get the passport (and even more shocked my mom did not hide it from us :) after all the bureaucratic nightmares J had to deal with (rockstar award). Now we can finalize plans to return to our little island. It is also weird to see her name in print. SO official. Makes me feel like this is all real, like she really exists. I know that sounds bizarre but up until then I just sorta feel like we were just playing house. Her picture is already out of date as she was barely 2 weeks old when it was taken.* And lets be honest we could take any white bald baby in and out of the country on this passport since babies change so much early on. She will have this same picture until she is 5 but by then she will join the ranks of world traveler!! Pretty exciting!!
*the story of taking her picture and applying for her passport was hilarious. They told me that she had to be looking at the camera, sitting up, both eyes open, not crying, both ears visible, and that my hands could not be seen anywhere. My response.. "Yeah, good luck with that she is 2 weeks old!! She opens her eyes for maybe 10 minutes a day!" But after many tries we actually managed to get a picture pretty close to what they wanted and apparently it passed inspection.
Email Post
Labels: passport

Griffen said…
We finally had to strip Griffen down to his onesie, and the guy in Nairobi got out this huge fan to blow on him to make him uncomfortable enough to wake up... that's with Reid squatting below the stool that Griff was propped on, trying to cradle his little five-day-old bobble head with two fingers and keep his fat hand out of the shot... Repeat scenario three more times over four more years - with the SAME GUY!! We're pretty tight by now.

And people on both sides of the ocean ask us the same thing about leaving the kids behind. I can't imagine!!!

Can't believe you guys are headed back already! As always - I find your transparency refreshing, challenging, encouraging... all that. Thank you. We're praying!!!

annalea said…
yay! too funny about the photo the lady at cvs made me take three just to get it all right. i can't even imagine trying to get a two week old's done.
10/2/10 11:50 AM

Meghan Baird said…
Ohh, that is hilarious about the passport photo! Did you prop her in a chair or what? What were they thinking?! Oh, bureaucracy. I'm glad it all came through. :)
11/2/10 10:31 AM