We just returned to my parent's house after an eventful and jammed packed week in Chicago. I love the city. I love the noise, too many people crowded in small spaces, urban bustle, the food, public transit, our church, and most of all our fabulous friends.

An amazing dentist in the city donated dental check ups for our family. It was Anni's first trip to the dentist and even though we pumped it up to sound crazy fun and even offered a "reward" (OK bribe) for being a good girl she was terrified. It must be innate in everyone to fear the dentist. Dr. Sam Park was so great with her and even did an exam and x-rays on her baby "Blueberry" to show her no torture was involved in the dental experience. Once the technician promised a princess toothbrush and "princess teeth" if she allowed her to put polish on Anni was in and happily sat in the chair while watching a kid's movie flickering above her head. I was shocked she did so well. She even said "Mama, I wanna come back to the dentist tomorrow" on our way out. These place knows how to do it! All of us had great checkups (except that the dentist said I had some enamel damage from puking so much, not surprising but since it is not going to be an ongoing problem caps are not needed). Amazing blessing that we were able to go for free! 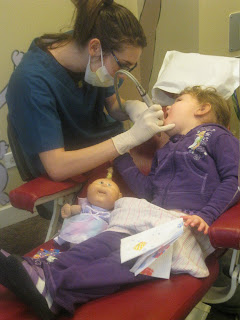 Another awesome blessing was a friend from our church in Chicago, who Anni LOVES volunteered to babysit both girls so we could have a date!! A real date with my love with no kiddies, no breastfeeding, no diapers! We had a great coupon for one of those Brazilian-eat-so-much-meat-you-might-explode places downtown. Jason was thrilled and even had to go to the restroom mid-meal to loosen his belt in order to properly pack more in: that is my hubby! Of course since I am not a fan I just got the salad bar which was equally exciting with portabella mushrooms, asparagus, and an array of fancy exotic cheeses: yummy! We were basking in the glory of all foods we cannot get in Africa and both stuffed ourselves silly. 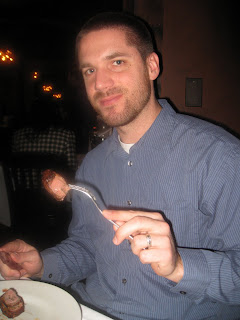 The night was made perfect because we walked to the El in tons of snow. Even though I am not a fan of winter the big fluffy snowflakes were beautiful and covered the grime of the city in a blanket of white. Sorta redeeming. We could not resist acting like kids and throwing some snow on the way home and I remembered how important it is to just have fun and laugh with J. We arrived home full, wet, freezing, but so thankful to have had some time as a couple in our fav city. 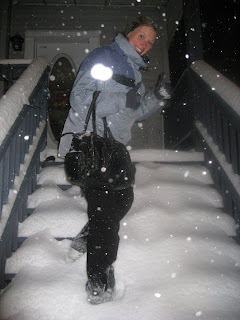 My legs are not that short: there was TONS of snow!! 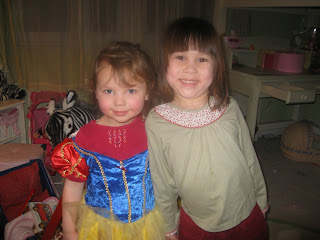 We spent tons of time with friends and many people had us over for meals which meant lots of driving in city traffic (I DO NOT miss that aspect of living in Chicago) but great times of catching up and for Anni making lots of friends. She is especially impressed with how many dress up clothes little girls here have. 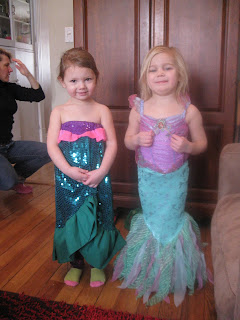 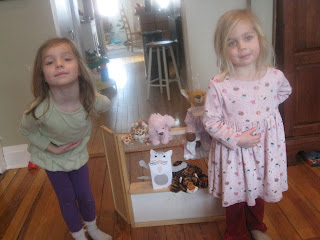 The girls and I even had time to take in a brilliant puppet theater performance at the Anstee's place. We also brought a meal to new second time parents and friends from college Sarah & Ryan: congrats!! They named their new little girl Annikah!!! Great name!!
On Thursday night I was honored to be able to share about our life and work in Africa with some women in the Northfield area. We were invited to share by a good friend from South Africa Chloe. We arrived early as they invited us over for dinner and as always it was memorable. Every time I think my life is hectic I just think of Tim & Chloe :) They are always operating at a high octane level and it is awesome to be with them amidst the craziness because it is always great chaos. We actually ended up having a Costco roasted chicken and guacamole for dinner because we will all too distracted to make the salad or find other food. We also got to catch up a bit amidst kids running in every direction and trying to set up for the guests. Our time with them is always too short. Chloe is stepping out in faith to start a new group called Jars of Oil (based on the passage in 2 Kings chapter 4 where a widow approaches the prophet Elisha. She tells him that her husband is dead and a creditor is threatening to take her two sons away
as slaves. Elisha asks her: “What can I do to help you? Tell me what do you have in your house? The passage ends in God providing more than enough for her to care for her sons in a miraculous way). The purpose of Jars of Oil is to help bring resources together to help organizations making a difference in Africa and to empower those on the ground there as well as mobilize people stateside to join in on the work. Very Cool!! Chloe has an amazing ability to speak the truth, even when the truth is in your face, in love. Each woman was encouraged to bring jewelry they no longer wear and $100 each to donate (and sell things in their home if they did not have the money) even without knowing that much about us: Amazing!! It was such an encouraging time for me to share about all the amazing stuff happening on our island and I hope to continue to see this group make a difference in Africa. I ended up getting home so late that night because in the chaos because I misplaced my cell (which I had set to vibrate and both Chloe and I did not know my number or J's number). Now, I would plead lack of sleep which although valid is a lie in this case because I am notoriously bad at remembering numbers. We had to unpack and repack only to discover that the phone was wedged in the couch. I guess you had to be there but I could not stop laughing at the scene...maybe that had to do with lack of sleep! Anywho, it was a great night and I was so blessed to be a part of this initiative. 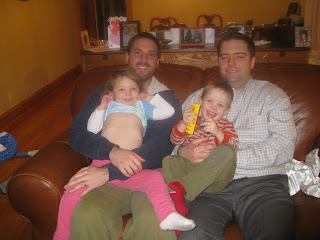 On Friday we were treated to dinner (and full body check hugs that made one little girl cry a few times) by the Studee fam and their two boys (Joshua was the one involved in rambunctious hugging and acrobatics of all sorts).

Saturday was another adventure. J heard about a free movie for kids sponsored by my favorite alderman in our old hood Roger's Park and he and Anni headed out first thing Saturday morning. By the time they arrived this was the line! Down and around the entire block. Looks like we are not the only folks who like free family stuff. 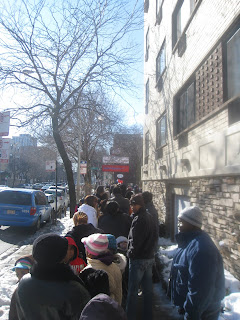 J and Anni did eventually get in (they cut it off about 20 people behind them) and saw Kung Fu Panda while enjoying free popcorn. I guess Anni was not that impressed since there was an obvious absence of princesses and pink frilly dresses but Evy and I got a quiet morning at home. 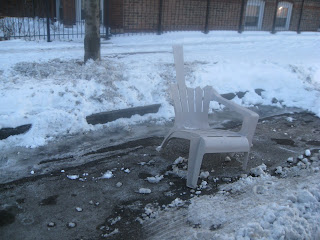 I must end my ode to Chicago with one sure sign of nasty winter weather: the broken chair in parking spot. Like in many cities folks like to claim their spot after they spend the effort to shovel it out by placing chairs, coolers, ladders, basically just about any crap in the street to "reserve" spots. The funniest part is that people sometimes put stuff in a non shoveled spot. Now c'mon that is just taking it too far! Great week in Chicago.
Email Post
Labels: chicago date night snow

jkww said…
rox! did i miss you guys while you were back in chicago?? blast. you were right on my block this weekend!