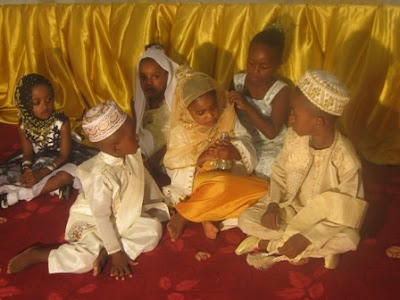 the bday girl (middle) surrounded by her cousins
OK, so I am embarrassed to admit that I have actually seen an entire episode of My Super Sweet Sixteen on MTV, probably more than one if I am coming clean. I guess my disgust and shock at how these teens are able to manipulate their parents and get everything their way is just appalling and I must see how it turns out. The only thing worse that the spoiled kids is that the parents allow it. For anyone cultured enough to have never seen the show it is about a young person throwing an over the top, ridiculously expensive, and utterly ridiculous party. Well, Annikah and I attended a Swahili version last week. The good part was it did not involve a spoiled teen demanding everything but rather was a chance for a family to show off a bit and really throw a BIG party. I guess this family lives part of the year in England so they well off. I got the invite the SAME day and we were rushed to find a gift and get ready. I had no idea how fancy it would be and was thoroughly under dressed but I always carry a head covering with me and managed to quickly put on some lipstick to at least improve my situation of being the idiot Mzungu. It was at a ballroom here on the island and required a fancy invite to enter. I did not even know that ballrooms existed here! It was painted pink (the people here LOVE this color or any bright color as our team mates moved into a brand new home that was painted bright pink in EVERY ROOM!! Anni was the only one who was a big fan :)
We went over to pick up my local friend who had invited us and her cousins. We arrived 45 minutes late knowing how timing works here and she still had not showered or changed: Hilarious!! So Anni, I and her 2 little cousins waited around for another hour while everyone else got ready. We finally headed out and upon entering the room I knew this was not like any party we had attended before. There was the traditional band, loud and blaring speakers, and amazingly dressed women and kids. We all sat on the floor and throughout the night were served water, juice, ice cream, cutlesi (fishcakes), and little bags of candies (Anni's fav). The girls danced and finally the birthday girl (who was turning 3!) made her appearance escorted in by her mother who was dressed to the nines and many of her small cousins all dressed up in amazing clothes. Their was a time of prayer followed by more dancing and the bday girl and her family all changing clothes and then reemerged to cut the 3 tier cake! It was unbelievable!! Anni mentioned to me that her birthday party was next week and I was sure to remind her that the only resemblance to this party would be that there would be friends and food and maybe I would throw in a couple balloons. As long as she was promised a cake she seemed happy. We finally had to leave as it was very late and my prego self had been sitting on the floor for way too long but our hosts kept saying our favorite Kiswahili phrase subiri kidogo (wait a little bit) because there was going to be gifts for all the guests. We tried to politely say that actually we need to get home as Anni has school in the morning so the Mama of the family went in the back and snatched a gift bag for us early. So sweet but embarrassing as well. The gift bag had a head covering for Anni which she loves to play dress up with, a prayer book, and a TON of food. It was another crazy night and we got to be a part of what a Super Sweet Bday Swahili Style is like!! 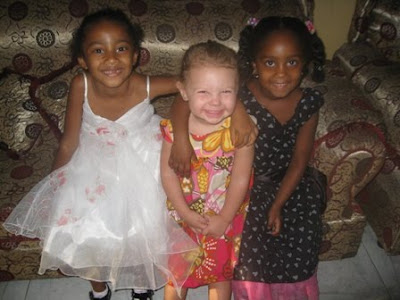 Anni & her friends wait for everyone to get ready before we hit the party! 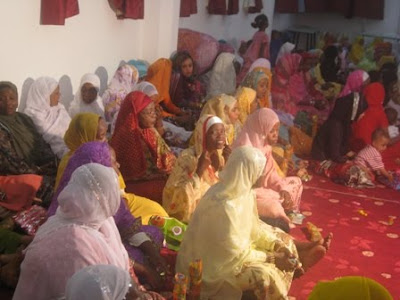 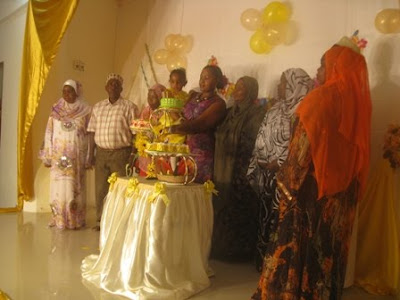 cutting the cake and family pictures 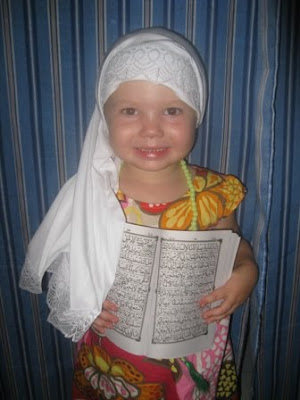 mjune said…
Anni is so cute with how easily she fits in and moves with the music - that girl has a natural ease with herself and her surroundings. Not too mention natural rhythm! Love, Michelle
10/10/09 1:27 AM