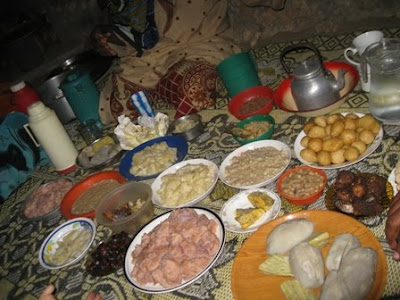 Breaking the fast with friends.
It is a busy and festive time here on our island! The end of Ramadan means that big evening meals to break the fast are soon coming to an end. Many people invite each other over to eat this last week and we received several invites to join in on the feasting. It is a time of celebration, of anticipation, and of spending time together. Jason went by himself sometimes because I was feeling terrible and it is usually a late night for Annikah but we also wanted to go as a family when a friend invited us to his mother's home for futari (breaking the fast).

It is an honor to visit people here and to bring your children is expected. The afternoon we were supposed to go I was feeling very sick and throwing up a ton. I told Jason we may have to cancel because I was worried I would not be able to eat and thus disrespect them but since we really wanted to go I prayed that I would be ok and although did not want to go I would go. It was an awesome blessing because as soon as we got there I felt better. I was able to talk, help set out all the food, walk around the neighborhood, and eat a few things. Yeah!

We arrived and greeted everyone (a long process) and as always we attracted a group of children who wanted to inquire about what the Wazungus were up to. Again, we were reminded how welcoming and inviting people in this culture are as they were very happy to receive us and as we arrived quickly searched for seats for us as guests. The Mama of the house came out with a couple wooden stools and one old computer desktop case for a seat! Not the most comfortable seat but I love Africa! At least it is re purposed here, in the states it would end up in a landfill! The Mama was busy sewing some amazing smelling flowers together as a gift for Annikah. She explained to me that she sews kofia(the hats worn by most men here) and sells them in market and showed off some of her work to me, very detailed and difficult and it takes so long to complete. After talking a while they informed us that it was time to swap food. We then followed our friend around to different neighbors homes where we or he would bring a small plastic bowl filled with viasi (sweet potatoes) and the neighbors would then disappear into their home and reemerge with another small bowl of something they had prepared. The food during the time of Ramadan is different to the foods eaten daily here (sort of like the foods we only enjoy on Thanksgiving of Christmas). At each house this continued until they had an amazing variety of food!! We felt privileged to be a part of this time of community. I could not help but think if we did this stateside maybe the holidays would not be so stressful on many who prepare everything themselves! I shared this thought with Jason who quickly pointed out that NO ONE can make crescent rolls like his Mom:) True.

After swapping food and greeting many people we headed back to the home where the women washed and prepared for the feast while the men we to the mosque for the last prayer before the evening meal. They invited Jason along and he went with them (although no one who is not a Muslim can enter a mosque here so he waited outside for them). While the men folk were out I helped the women set out the large mat and then all the various foods, chupas of chai, water, and juice. It was an amazing spread!! While I was helping Annikah was running amok with some new rafikis. I was trying to keep an eye on her but she disappeared into a neighbors house and when I called for her another Mama responded "mtoto mzungu ameingia" (the white kid entered here) after retrieving her from a neighbor's house I was pleased that she had at least used the proper request to enter!! She has only been here a little over a year but I think of all she has learned in that year; all the ways her perspective on the world has changed, and how she has learned to explore this world, to make friends and to be happy here. It makes me proud to be her mama.

The men arrived back home and we all sat down to eat. We dug in!! It was an amazing feast!! Annikah devoured any samaki (fish) put in front of her and we got to try many new foods. We talked with the extended family that was there and learned a ton about this time of year as they explained the traditions. They asked about our marriage and we got to tell the story of Jason asking my parents for my hand and his proposal to me. They asked about what Chicago is like and we described the buildings, weather, and sites a bit. After a while of talking and eating the power went out and it was pitch black. The kids were running around like fools while everyone looked for a flashlight or a kerosene burner. Just as they emerged with one the power went back on. This process repeated 2 more times before we decided that Anni was exhausted, dirty, and needed to get home to bed. We thanked everyone who then followed us to where our car was parked and again we thanked everyone and invited them to come over soon. We were full; of food and of gratefulness that people are so kind to welcome us into their families, their homes, and their lives. 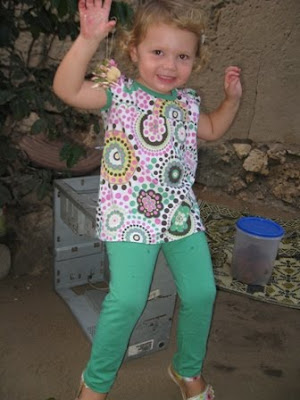 check out the "chair" we were given.... Anni shows off the amazing smelling bouquet of flowers the Mama of the house sewed together for her 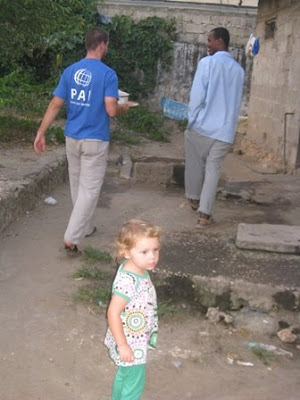 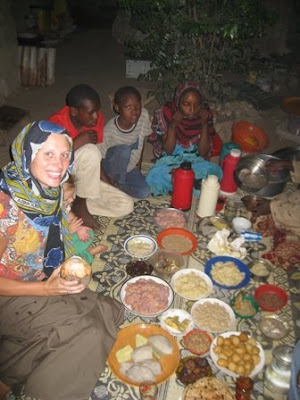 right before the big feast...coconut in hand I am ready to dig in! 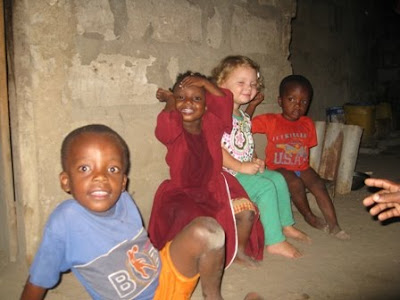 jkww said…
yay! breaking fasts is a good time. i'm glad you were able to enjoy a bit of it! reminds me of when we did that fast in undergrad and how we mowed into everything we could find :) love you!
21/9/09 9:13 AM

Gma Rho said…
The variety of food is incredible! Did you know what you were eating? Is this one of those times when you use your fingers and all eat from the same plates?? And tell Jason that I'll be sure to make his fav crescent rolls at least a couple of times while you're home!!
24/9/09 7:49 AM

Roxanne said…
we knew some of what we were eatingwe asked about a lot if it as it was new special foods. Yes, everyone washes their right hand adn we all just eat with that hand together- no plates or silverware here :)
24/9/09 8:52 AM