a word about transport

When I first visited Ghana, Africa years ago I distinctly remember being shocked at the roads, vehicles, and general methods of transportation. I guess in living here I am gotten used to the situation and although I much prefer American roads getting around here is always an adventure. I have blogged about this before but first, there is never anything too large to be taken by bike; computer, refrigerator, couch, ....you name it! Then, there seems to not be any sort of limit as to how many people or stuff can fit into any sized vehicle. Also, animals, people, piki-piki (motor bikes), cars, trucks,and bicycles share the road and often there is no lane, per se. Maintenance and safety standards are a bit sketchy at best as well. Jim and Rhoda got a taste of all of the adventure of traveling in Africa on our road trip to Arusha but we could not let our Survivors leave Africa without riding the infamous dala dala. Since Miss Anni LOVES riding it she was more than happy to show them the ropes and we made it easy by only taking a short ride from town back to our house; the route we take all the time.

We were completely convicted on our evil plan after reading the travel advisory* they were given before coming to Tanzania. Jason and I laughed out loud and it must be preserved here for future giggles:

In-town transportation is best accomplished using taxis or hired drivers from a reputable source. Travelers should be wary of using the ubiquitous microbuses (dala-dalas), which are frequently overcrowded, poorly maintained, a common site of petty theft, and whose operation is generally unsafe.

My absolute favorite is that they use the word ubiquitous!!! This section about driving was also included and explains why we dislike driving here at night:

Drivers are advised against nighttime travel. Roadways are often not marked and many lack both streetlights and shoulders. Pedestrians, cyclists, and animals are often encountered on unlit roads after dark, as are slow-moving trucks and cars traveling without lights. Carjacking and other related crimes are more common during the nighttime hours. Traveling in rural areas after dark is strongly discouraged.

In urban areas, it is common to find main arterial roads paved and maintained, while secondary streets are severely rutted and passable only with high-clearance vehicles. Traffic lights are often out of order, and care should be exercised at any traffic intersection, whether controlled or not, as many drivers disregard signals.Excessive speed, unpredictable driving habits, and the lack of basic safety equipment on many vehicles pose serious traffic hazards.

We cannot say that any of it is untrue although we do find that here on the island they are fairly safe and people are always very helpful especially when I travel alone with Annikah and heavy bags from the market. Our Survivors were up to the challenge and although Rhoda did wonder why we did not leave after it seemed the dala-dala reached capacity...as we have learned "there is always more room"! So Jim & Rhoda are true Survivors having ridden the feared dala-dalas and lived to tell the tale; a bit sweaty, a lot crowded, and worth it for bragging rights! 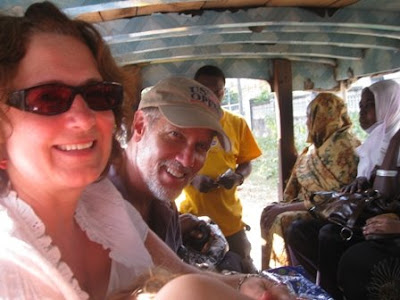 *The travel advisory also advised that they NOT walk in places where there are chickens....might as well recommend NOT COMING TO AFRICA!!!

Gma Rho said…
Every seat was filled when we counted twelve people on the dala-dala. It was hot, and we were ready to roll. But that did not happen until ten more people got on!!! Besides that, they had hauled super-heavy bags of stuff on the roof, and we feared that it would cave in on us. The dala-dala was definitely one of our more difficult challenges!
12/8/09 8:34 AM

Bibi Ronnie said…
We were lucky to run out of time before being able to ride the Dala Dala, but then I didn almost got arrested in the car. I was always amazed at how many types of vehicles were using the same road. Jason was a rock star, because I would have kill hundreds, especially since they drive on the wrong side of the road.
12/8/09 5:28 PM