I am unsure how this happened but I have a girly girl! It is not as if I woke up today with one, it has been more of a metamorphosis over this last year. It was gradual, a process, and she does NOT get it from me....

I was the girl who once "borrowed" my Dad's electric razor and tried to shave off my brother's and my eyebrows in a botched attempt to look more like G.I. Joe's. I played fort building and war with mostly boys in our old neighborhood, heck I even peed outside virtually an entire summer! I wore goth, and died my hair black and green, and did other equally horrifying but UN-girly things in my teen years (sorry Mom) but alas I have a girl whose entire world is about pink. Now, I am sure there exists many photos of me wearing girly clothes....an Easter picture in all white lace with matching parasol comes screaming to mind but I contest I was too young to know better, or was under duress, or was offered gifts:) Ok, maybe at one time I was into all things girly but it was a short phase.
I think in tracking Anni's transformation to pink-lovin' girly girl it started with the Disney Princess backpack that my mom sent way back that also happened to come with a crown which happened to become almost permanently glued to Anni's head. Anni did not know who the ladies were and at first called them Wazungus; the white people. But she soon caught on (after some strategic product placement) and now I can safely say she is completely obsessed with anything pink or princess. Mostly I would like to blame this on my mom who sent many generous packages all containing something Disney Princess (and my mother in law who this week sent a package containing a Cinderella T-shirt to feed her obsession :). Annikah started with a book set containing each princess's story that she wants us to read and reread everyday, even though we "suggest" other books. She can retell any of the stories, knows each princess' name, and gives special emphasis when she tells of the "bad guys." She explains "Mama, them bad guys rip Cinderella's dress cuz them jealous" which, while showing grasp of character motivation, gets old when repeated 10 times a day followed by a request to watch the movie. She evens calls the Seven Dwarfs the "Hi-Ho friends" and can sing the entire song for anyone willing to listen. She can spot a princess on any product from 100 yards away and is always sure to point it out. But the point of no return came when we allowed her to watch the few movies we have on our computer. Yes, it is our doing as this became almost an everyday occurrence when I was really sick. Cinderella, The Little Mermaid, Pocahontas, Snow White, Sleeping Beauty, over and over and over.We tried to sneak in Cars or Finding Nemo but most of the time they were a flop. She also received a generous package of dress up clothes from a family at our church and can been seen wearing the "princesses dresses" and crowns at least 3 times a day while dancing in her room. Anything sparkly, pink, glitter covered, headband, bow-like object makes her day and a few weeks ago she suggested Pochantas as a name for her soon to be appearing baby sister...she is far gone I tell you!
Now, it is not that I completely abhor all things princess but c'mon, let's evaluate the story line common to most old school princess movies...
dumb (or at the very least completely naive) but pretty and kind girl has something befall and interrupt her innocent little singing to animals life.... She falls in love after seeing generic and equally devoid of emotion prince once. Lots of singing, some difficulties, and some amazing evening wear follow....fast forward...In the end prince comes and saves dumb but pretty and kind girl when tragedy befalls her and with one kiss and they ride off into the sunset to live happily ever after.
I am not really digging the damsel in distress gig but Annikah cannot get enough. I will resist my desire to break the myth of these stories at least for a bit since they make my daughter so happy. She will learn soon enough that he world does not really work that way and I have no fear that I will raise anything less than a strong little woman who knows what she wants and goes after it. I pray the only man she asks to rescue her is her Heavenly Father. And even if I don't love a good princess story I want to support her girly girlness of the moment because in her world it is valued. Even Cherished.
Tomorrow is her 3rd birthday and we will have a pink princess themed tea party here for her. It will be small since most of our friends and neighbors are fasting thus making a kid's party not that much fun (we will throw a BIG party like last year after Ramadan for everyone). When my mom was here she brought enough pink princess favors and decor to outfit the entire island so everyone will get lots of goodies and at Miss Annikah's request I will be making pink cupcakes. Anni colored the envelopes of the invites today and selected special stickers for each friend she is inviting. She also filled each goody bag and cannot wait to hand them out tomorrow. Yes, on Monday we will have a pink princess party because in Annikah's world right now pink and princess are very crucial. And because in Anni's lil' world pink matters, it is of monumental importance to me. 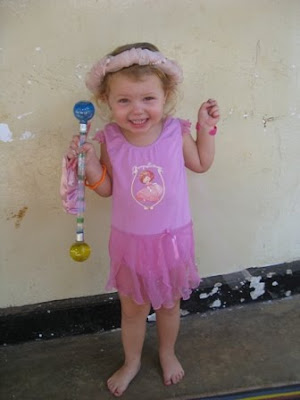 Bibi Ronnie said…
I know I failed with you, but with Anni and another new little girl on the way, I just can't help myself! However, Belle is not a typical Disney girl. Also, Anni is very much her own girl who know what she wants when she wants it. Even my dog, Dip, is like that! So I can't be that bad of an influence.:) Great talking to you. Hope Anni's pink tea party is a smashing success!
30/8/09 12:20 PM

Meghan Baird said…
Aw, I LOVE this story of Anni and laughed out loud! She cracks me up so much because she really DOES know what she wants. I'm sure the damsel in distress thing will be a fleeting love and she'll move on when she realizes that the damsel doesn't have strong opinions like she, herself, does. Thanks for sharing! I wish I could go play with her, Anni is such a cool chick!! :)
30/8/09 6:08 PM

Michelle said…
Oh, Mamacita, I feel you! Gillian is the exact same way, and I am equally mama-so-not-girly.. Where did it come from? Gillian likes to be a Princess Ballerina-a related but different can of worms. She insists on wearing the tutu everywhere..sometimes with the crown, sometimes without (but ALWAYS with nail polish of the sparkly variety). But, it is precious, isn't it?

jkww said…
happy birthday to anni!! i still can't believe she was such a tiny bundle just 3 years ago =)

Laura S said…
So funny! I, of course, have the rough and tumble, can't get enough of CARS movie boy who would now wear camo everywhere if he could. OK, so I WAS a tomboy, but who will I share my love of regency romance and Anne of Green Gables with? I will force read the Little House books to my sons because they are educational! Happy Birthday to Anni from all of us!
31/8/09 2:32 PM

Stan and Jess said…
HAPPY BIRTHDAY ANNI! And you are a princess! I'm with JKW, how is it possible that she is this big, when just the other day we were at the hospital holding her?!
31/8/09 7:43 PM

Anonymous said…
This post is priceless. When can I find out more?
Feel free to visit my homepage :: cramps but no period
2/9/12 1:38 PM