We just arrived back on the island after a scary and trying few days. So as I have mentioned I have been wicked sick and trying to keep food down every day with little effort. Last Saturday it turned from bad to worse. I was home by myself for the day because Jason was out with a local friend helping him get his business started (he also took Annikah since I am pretty useless for meeting the demands of caring for her these days). I was trying to continue game plan as usual; drink sips of hydration drinks and other liquids and eat a few bites of bread or rice whenever I could. From the first time I ate a bite or a sip of anything everything came up. Usually I can keep down a few bites or some soda but nothing was staying at all. I continued to lie around and wait for Jason to come home but by the time he arrived I had already thrown up everything I had eaten or drank plus a lot of stomach acid. He brought some ice cream (I wanted some earlier is the week but all the stores were out) so I was eager to try that but about 10 minutes after eating a few spoonfuls it came up as well. Over the next few hours my vomiting became completely involuntary and I throw up about 20 more times. Because there was no food left I started throwing up acid and green bile. By around 8pm I was sobbing, exhausted, and could not stand up because I felt so dizzy and weak. That was the sign to us that something was really wrong. To date this has been one of the scariest times of my life. Knowing I was so sick and really unable to get any care here that we trusted.
The next morning our team leader came over with a German midwife who lives here with her family. She generously offered to help and assessed me and gave me some anti-vomiting suppositories (not so fun but obviously no oral meds would work) and began an IV drip to rehydrate my body. The funniest part was that we had no latex to tie off my arm to try to get a vein and Jason offered a condom!! Way to be resourceful! Luckily we remembered our First Aid Kit in the car that had 2 gloves which she used to get a vein. We tied the IV bottle to some local rope and nailed it to the wall. I sat all day getting fluids but unfortunately I was still vomiting and unable to drink or eat. 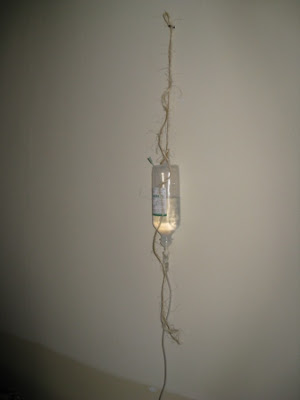 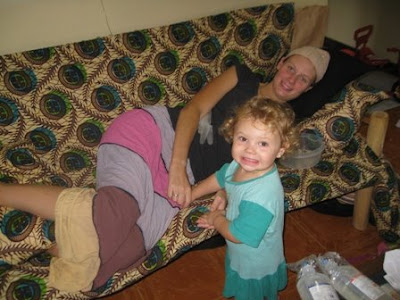 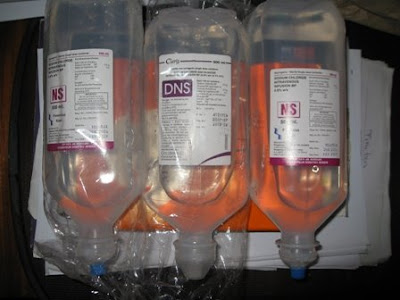 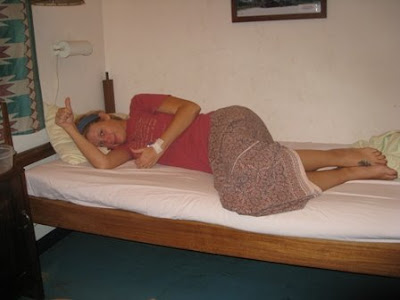 at a guest house in Dar....fluids do the body good
Email Post
Labels: HG medical pregnancy

Kevin and I are pr aying for you! We're glad you're able to be back "home" for now.

Annie said…
I'm so sorry to hear about all of this - hopefully having your mom and sis there will help - even if just to lift your spirits a bit. Sending healthy thoughts your way - miss and love you!
4/6/09 7:44 AM

Kim said…
UGh! Hearing the details makes me cry for you. I have had a couple friends with hyperemesis...miserable even in states, can't imagine there. WOW! I bet you guys didn't even know "how much you could handle!" Love you, still praying, continue to let us know your needs!!!

Unity said…
You all are in our thoughts & prayers. I am very sorry that you have go through this Roxanne. May our Lord give you the strength to get through this & Also for Jason & Anni.
4/6/09 8:33 AM

Laura S said…
I am so glad you were able to keep at least a few things down. I am so sorry about the HG, I can't even imagine that given how much I complain on a daily basis! I continue to pray for you guys and everything there. Last night I dreamt I was at the hospital with you and we were talking about stuff (I can't even remember what now). When Joshua woke me up, I was very upset because I wanted to talk to you longer. I tried to go back to sleep, but the dream was gone. BTW, Joshie says hi to Anni. Love, Laura
4/6/09 9:16 AM

jkww said…
roxi my love, i have been thinking of you a ton and praying and praying for you! i put the word out to all my praying friends to pray for you too =) i cannot fathom being that sick. i would have passed out into some sort of catatonia if it were me! you are a rock star.
love you love you love you!
jkw
4/6/09 1:11 PM

Stan and Jess said…
whoa. 1 in 300 huh? you always try to be so unique. I think with you in this state it would probably be a fair match to do advance Tae Bo, eh who am I kidding you would still whoop me. That green stomach acid sounds like you were vomiting haterade. What was it that Mrs. Jackson always said (besides I am for really! I didn't mean to make your daw-ter cry...) "I'm sorry honey, but that's your reality,"? Laughter, its the only medicine I really am licensed to perform, sorry if it hurts the tum. Feel better! Funny thoughts to make it better... Red fleece, We have magots aren't you proud?, Johnny Boy in elf costumes, you and Jill breaking the swing, squirrels breaking & entering, Andrea running....

Gma Rho said…
I am so happy you made it to Dar and received good care there. Praying that this experience might be a turning point in your pregnancy - for the better! I hope you feel well enough to enjoy having Katy and your mom there. It's a comfort to know you'll have some help for awhile. And then three weeks later, Jim and I will be there to help, too!
4/6/09 3:16 PM

Bibi Ronnie said…
As horrible and scary as this has all been, I laughed out loud at your sense of humor of the babby sleeping through the night, and being potty trained! I will be there soon, and if you still aren't feeling better, then I think you all should come home till the baby is born. It is not the easy way out, it is the safe way out. I don't want anything to happen to you are that sweet baby you are carrying. I'm glad Katy and I will be there to give Jason a break, too. I guess you are all over the fear of needles and doctor thing, right? See you soon, honey.
4/6/09 4:22 PM

So sorry to hear how sick you have continued to feel this week. You have come to mind so often in the last few days and I have been praying for your healing. It will be so good for your mom and sis to be there with you.

Jorie said…
I love the thumbs up picture... makes me smile. You are quite the rockstar! It is good to see you in good spirits in the photo despite the scary and painful journey you've experienced these past few days. We love you and are so happy you're all back together again and doing SO much better!
4/6/09 11:20 PM

misskatiez said…
you are a rockstar rox - you'll get better soon!! i've been thinking about you guys a lot - and sending get better soon thoughts on the way to you!
love ya!
5/6/09 7:15 AM

Anonymous said…
You dont know me but I came by your blog through a friend and wanted to let you know that I too had this durning my pregnancy. I was severely sick and hospitalized for this 7 times over a two month period for a week at a time. I then started having blood clots and ulcers from vomitting and IVs...Just wanted to tell you that God is good and he got me through it and you are MOST DEFINATELY in my prayers....The vomitting is definately no fun but as a mother I know how AWFUL it feels to be so helpless and unable to care for your child. Good luck with this as I had it up until 3 weeks AFTER I delievered!!!!!!! God Bless you and your family!