wedding of the fly!

I attended a wedding on Friday. And I found out I was going Thursday night. My good friend told me a while back that I was invited to a wedding sometime in April and then she came by Thursday to let me know it was the next day and that I should be ready at 4:30pm. She also told me she would call me to remind me to take a shower and get ready (did she really think I might forget?) She also helped me pick out acceptable clothing and jewelry, the rule seems to be the more the better! Women really get dressed up here and I constantly feel like a shlump-a-dinka so I was very grateful I had just had a shirt, pants, and head wrap made from fabric I picked out with her for our pasaka party so I was ready to go (younger women sometimes wear pants as long as the shirt covers your butt). I also had henna done Friday afternoon with Paula in preparation for our pasaka party so that worked out perfectly as well. Except that I was running so late in returning home and I must have the only African friend who actually showed up early to pick me up. I was virtually naked and was sprinting around trying to get glammed up when she arrived. It is a lot of work to be a woman here! Exhausting for me who is used to wearing jeans and a "nice" T-shirt and maybe putting on mascara if I want to look really special. Even the way I used to get dressed up is no where near as much as they put into to their appearance here for special days. I thought I would go sans Annikah because the last wedding I attended went really late but when my friends showed up to get me they insisted that she came and quickly helped me dress her and do her hair. And we were off!

The wedding was packed with people. Seriously probably about 100-200 women sitting on mats in front of the house where the bibi harusi (bride) was waiting. We were quickly shuffled into the house to greet her and present our gift. She was dressed in green (a color of blessing) sitting on a bed. Every part of her body was covered except her hands and feet which were beautifully decorated with henna. Everyone comes in individually to greet her but she misses most of the party going on outside while waiting. 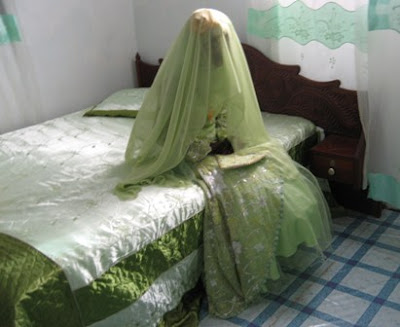 After greeting the women in the house we joined the hundreds of women outside sitting on mats. The men were a few houses over. The are very separate spheres here for men and women and the only men by us were musicians. We sat, talked, admired the beautiful clothes, and listened to the music. After a bit most of the women would stand for each song and dance. At the insistence of my friend we joined in and of course were quite a spectacle. Anni had the sway they do down perfectly. After about an hour the dancing got a bit more crazy and by the end women were waving money above their heads and shaking everything their Mamas gave them! Of course to be culturally sensitive I joined in :) Plus, I love dancing! After a few hours they served some sambusas and spiced jelly stuff (I do not care for it). Finally, the bride made her appearance after the bwana harusi (groom) had already finished the official wedding, made the vows, etc with the men. She was carried on her relatives backs to the place where the men were gathered and everyone followed (I got a bit of this on video but was too far back to see the bride). I asked the significance of this but the women I asked did not seem to know (much like many of my cultural traditions they just "do it that way"). After we helped clean up a bit we packed about 5 more people than had arrived with us into our car and headed home to drop everyone off. The best moment....before we left a women came up to me and said she heard I was the one who knew how to make the banana bread and conveyed with big arm gestures that she must know how to bake it. I sent my friend over with the recipe the next day and I heard they made 10 banana bread loaves for the family celebration the next day. The Wazungu mkate wa ndizi is the stuff of legends y'all! 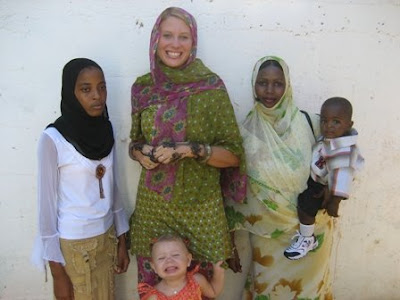 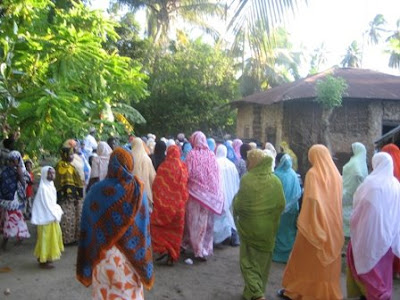 the procession to carry the bride to the groom 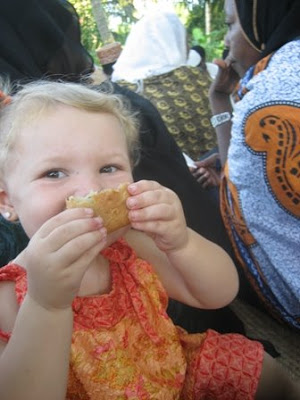 Anni liked the eating sambusas part of the party 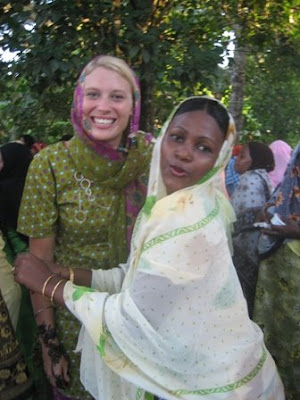 This pic cracks me up...
I love that she is still booty dancing while I stopped to smile! 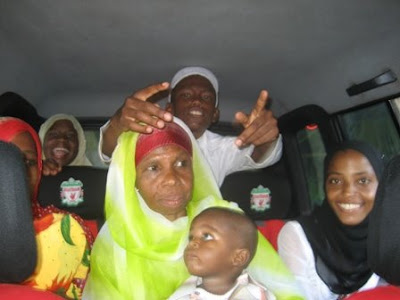 the drive home...
just how many people can we fit in the Wazungu's car? So far 12!

Bibi Ronnie said…
Anni sure has her moves down. Your ourfit is beautiful!!!Anni didn't look to happy for the one picture, though.:(
Such a change of culture. He makes the vows without her?? Does she then vow anything to him, or even know what he vowed?? What a great adventure. Those guys in the video were enjoying themselves, too.
15/4/09 4:06 PM