We had our Pasaka party on Saturday for our friends and neighbors here. The day started with a bang, literally. While running various errands in town for the party Jason got in a small car accident which could have been much bigger. A dala-dala with no brakes light stopped suddenly in front of him forcing him to swerve and hit another car. When Jason arrived back home he was a bit shaken up but thankfully (and amazingly!) our side view mirror and a scratch to the car was the only casualty. Thank you God!
I started cooking and baking at around 8am and thank goodness had some great help. I made 60 banana muffins! We made pilau, salad, cut fruit, chapatis, and lots of other snack foods. It was not stressful because of the help I had in preparing. A true blessing. 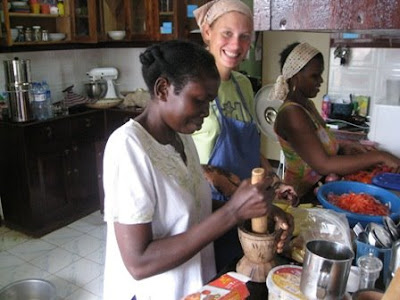 After some seriously needed showers and getting dressed we waited. And waited. We thought again that no one would show when at the start time only one of my Mama friends and her son had come. But we've learned not to think that too soon. Within an hour there were around 60 people here. I lost count of how many children. Most of our neighbors joined us and friends we know from other parts of the island came too. It was awesome to see so many people here. And really crazy! Sort of a chaotic fabulous crazy. One of the first guests arrived and asked to use our bathroom to shower and needed to iron his clothes before getting dressed (at least he wanted to look nice!). When we asked the adults why so many children had come my friend responded that people here have at least 8 kids. That would make sense. Still, there were about 10-15 kids that we had never seen before but I think word was out about the party and they couldn't resist checking out what the Wazungu were up to.

I think culturally we did a better job this time around only because my amazing Mama friends from our neighborhood helped me. My girlfriend was like a party consultant (seriously she could do this for a living... I can see the ad: willing to help clueless Wazungu throw somewhat relevant parties!). She helped me plan the food, told us to get the to-go trays (not only do you feed everyone at the party but at every party we have been to here they always give out trays of food to go home), and she came early to help me cook and prepare. The "mama crew" quickly sprung into action once the party started; cooking, walking around with a pitcher and bowl to allow people to wash their hands, preparing plates, serving everyone, cleaning, and putting the smack down on any kids acting up. They were an amazing blessing to us as we were pretty overwhelmed with the amount of people that came. We had moved all the furniture out of our front room (because we have seen many people do that here for gatherings) and even with a huge open room there was not one place to sit by the end. To walk you had to touch people's heads and step over kids. Both front doors were wide open and the rest of the people were sitting outside. It was nuts!

I thanked everyone for coming and asked them to forgive us if we made cultural blunders as we are students of language and culture. Jason then told the story of the first passover. I thought he did a great job as back home he's not a big fan of being in front of people but to fit in here he must do most of the talking (something I am still getting used to :). It was awesome to see so many people listening and responding to the story. He told only half of the story and then he prayed and we ate dinner.

The frenzy of serving food was complete chaos. By the end there was no food left at all. Not one bite and although some children were forced to share everyone seemed to have some food. Sodas were a big hit as well and we quickly went through over 2 cases. After dinner the "mama crew" rushed the kids outside so we could clean up the food on the floor and shake out the mats. After sweeping up about 5 pans full of dirt and food we invited people to come back and sit for the rest of the story. At this point there was also a loud wedding happening across the street that was making conversation difficult. The children were making so much noise outside as well that is was difficult to hear but the men wanted to hear the rest and asked Jason to continue. We were advised to get a PA system next time! In the midst of the chaos, Jason had lost the story we had written up and had to quickly print out another copy (thank God there was power). Though we are feeling much more confident in our Kiswahili, we did read what we had written as we didn't want to make any mistakes or leave anything out. Thankfully this is also very culturally relevant as at all events we've been to here the speeches are essentially someone reading their thoughts line by line.

During the cleaning frenzy one of the women that lives behind us came up to me and grabbed my arm and excitedly said that she understood the story and we used very good Kiswahili. That was a huge encouragement. It seems like the telling and sharing of stories is a very important part of this culture.

After the story, handing out the to-go trays, and returning mats to various friends the party started to die down a bit. We eventually had to escort some kids out of our gate as they were enjoying Anni's swings and probably would have stayed all night! About 4 guys remained to hang out with Jason and talk while I started the monumental task of cleaning. Annikah was so exhausted she actually asked to go to bed.....that NEVER happens! But she would soon get a burst of energy when a friend arrived. Anni loves her and as soon as she saw her she was wide awake again! Turns out my friend was late because she had not known when the party started and had been trying to call me for the last few hours. I felt so terrible and explained I had not heard the phone over all the noise. She even brought me an amazing gift for Pasaka (a beautiful dress). Since there was absolutely no food left in the joint I quickly grabbed the car keys, a shoeless Annikah, and we headed out to a stand we know that sells chips (fries) and these little meat pies they call "pizzas". She was happy to go with me and since Jason and I did not get to eat much either we brought back some food for everyone that was still left at our place. At around 9:30pm the last guest left and exhausted is not even the word. We could not believe how many people had come and pray that in a small way they were blessed by celebrating Pasaka with us! We could not have done it without the generous help of our friends here and we also learned a few lessons that we will have in mind the next time we plan a big event like this. Crazy, fabulous, chaos; good stuff! 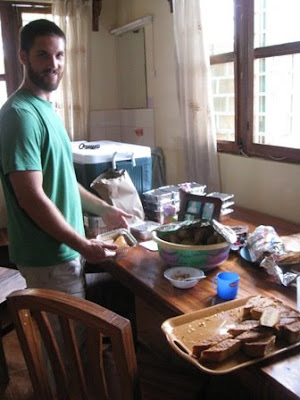 Jason helps make the to-go trays to give out at the end of the party,as we have learned a must for any party here 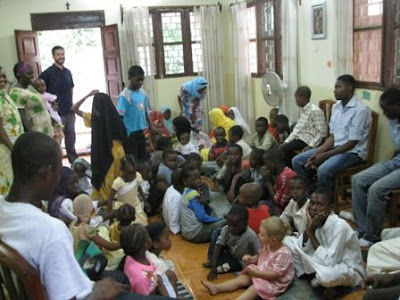 Jason about to start the hadithi (story) about the first passover 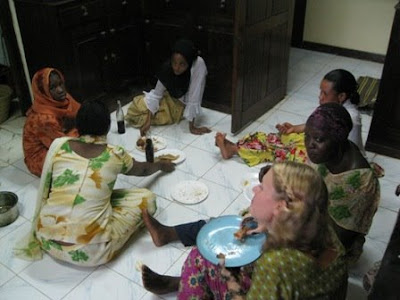 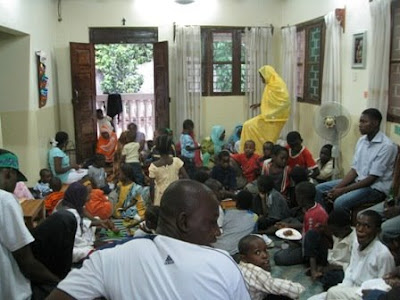 Bibi Ronnie said…
You really know how to throw a par-tay! Jason needs a teleprompter, like Obama who can't go any where without it. Way to go handling all the customs, language, and heat! You are all amazing!
13/4/09 5:50 PM

Gma Rho said…
Thank you for the great summary of your party. As our fam was gathered in our home (Jojosimark,JustAnnClaire, and Gma/Gpa Engstrom)we thought of you and wondered how it all went. We did pray for you on Saturday, too. I have NEVER hosted such a party! Great job! How neat that they all wanted to hear the entire story, too. At our house, we had an outdoor egg hunt for Joel and Silas, admired Claire in her adorable Easter outfit, and enjoyed a prime rib dinner. We missed you!
13/4/09 7:20 PM

Roxanne said…
yep, we both did everything in Kiswahili. Although I am sure we made many mistakes (but to limit we wrote some things down too) people here are very happy we are learning the language and are very forgiving also. And we are getting a bit better :) we better be :)
15/4/09 11:35 AM

annalea said…
that is great that the party went so well. i loved seeing the photos of the packed house and hearing all about the day. love ya!
15/4/09 5:46 PM