a late but necessary cake

Last Friday was busy and tiring. One of those days you are late and in a bad mood from the time you wake up. For no particular reason. I wish I was one of those people that can shake a funk off quickly or not take it out on anyone in my path (namely my poor husband) but *sigh* I am working on it. God is working on me. Mostly I am battling my pride, not wanting to admit that I may be causing some of the chaos around me, or at the very least adding to it. Nonetheless Friday was not poised to be a great day.

After finally getting out of the house to drop off food for the workers at the school site and take Anni to school before rushing to an all morning team meeting we were already a bit flustered. After the meeting, picking Anni up, lunch, and another meeting we headed home pretty exhausted. I knew that it was my girlfriend's birthday and a few weeks back I said I would make her a cake. Nothing in me wanted to. I was tired and hot and still holding onto to my funky attitude. Maybe she would not remember? She is probably busy anyway, I reasoned. I wish I could say it was a kind heart motivated solely by love that finally made me get my butt in gear and bake a cake but it was more my need to follow through on promises, to not lose face. I shredded carrots, sifted flour, measured sugar and oil and made a darn carrot cake. Jason was fixing some things outside and keeping Annikah busy with occasional pushes on her swing so I was able to bake and clean up. After about 10 minutes I smelled the unmistakable waft of burned cake, of hopes dashed. Indeed it was our uneven oven to blame once again (that and my not watching properly but we will go with the oven). At first I thought I could scrape off some of the charred parts but then realizing the inside was still entirely liquid while the outside was petrified I gave up hope. So much for my baking abilities. Now surely I could give up at this point. After all I had given it the old college try, right? It was almost 6pm and I needed to figure out what we would eat for dinner and get Annikah ready for bed. Lots of excuses rolled around in my head but none of them sat right with me. At this point I just knew that making this cake was what I needed to do, even if I did not want to. I mumbled something to Jason about me hating the oven and life in general, grabbed the car keys and headed to a duka I knew sold cake mixes. My saving grace at this point. Anni started protesting my departure so I took her with me even though she was wearing no shoes and just a T-shirt and underwear (as an aside one reason I LOVE it here is that shoes are always optional). We returned with a ridiculous funfetti cake mix (it was either that or orange cake mix...seemed a bit sketchy) and after dumping the mix adding everything popped it is the oven, this time the bottom shelf. Finally it was done and I burned my fingers trying to get the thing out and on a tray so quickly since it was getting so late, whipped some sugar, milk, and vanilla for icing and loaded a bag with candles leftover from Anni's B-day and the gift I had gotten her. I was off. After walking to her house her husband told me she was at his mother's house (the girl hangout in our hood). Once I arrived I "hoodi"ed at the gate and the response was many very excited "Karibu"s. My friend greeted me and after I wished her a happy siku ya kuzaliwa she said that she was so happy I came, that she had tried calling me 2 times and had already stopped over at my house 3 times. Her mother in law and 4 of her friends were there waiting to see if I would show. They were so excited to see me, maybe because I was the bearer of the cake, they kissed my cheeks and thanked me for coming. They quickly grabbed plates and forks and I followed cues to put the icing on and light the candles. We sang, we clapped, we laughed a lot. It was good. In those moments, despite my selfishness and my bad attitude that day, I was grateful. Grateful that even though my heart had not been in the right place He still used me to bless her in a small way. Turns out, though, the cake was necessary more so for me than for her. For me to learn yet again that He can use us in spite of ourselves and that He is always teaching, guiding, and revealing Truth to us even when we don't want to hear it. Even when we are stubborn. But even in small acts of obedience He shows up and makes up for our shortcomings, He makes all things right.

I had an absolute blast! We all fed each other cake, took tons of silly pictures, and she opened her gifts from me and another friend. Then she turned on some loud music and told us all to get up and dance. This was hilarious as a rapidly gathering crowd outside was laughing at us and our mad skills. After dancing a bit we chatted about the news in the neighborhood. One priceless comment I will never forget was her Mother-in-law saying something to me about being fat. Now at first, like many things I only picked out certain words so I asked her to repeat it "pole, pole" so I could understand. And understand I did. She said "when you first came here you were fat but now you are skinny" Now, how does one take such a comment? Which part is meant to be a dig and which part a compliment? It was obvious by what followed. Her grabbing my shoulders and waist and saying "you need to eat more" and "do you need help with cooking at your house?" So "fat" is what I am shooting for. Sweet! I must say living here is pretty great for a curvy girl's self esteem since apparently I am wasting away to nothingness even though I am fairly certain being all the all carb and oil diet I have not lost a pound since arriving.
They all praised the cake and asked me to teach them how to make it. Alas, I must now admit the secret of Western women everywhere: the mix. I hope they still respect me in the morning. 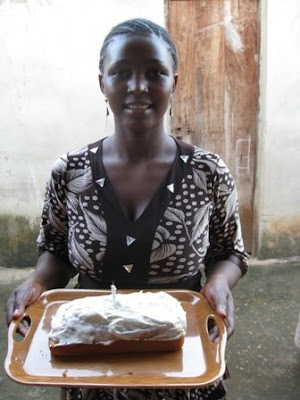 The b-day girl & the infamous keki! the best part of this pic is the boy in the background making the same face :) 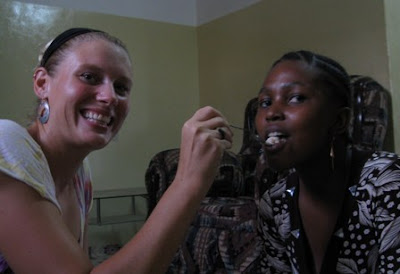 feeding each other cake..this tradition cracks me up....
I have flashbacks to many a wedding
Email Post
Labels: birthday friends gifts self image

Bibi Ronnie said…
Well the mother-in-law will know I'm well fed! I just hope I can lose some weight when I get there.
I love the pics here and of Anni on the swing. And I love Jason for telling her how much she is loved and how beautiful she is.
9/4/09 9:20 AM