Back home in Chicago I was not known as a baker. In fact I made ONE thing for dessert: oatmeal brownie bars (also known by their much more controversial name better than sex bars...my husband always is sure to remind me to clarify that they are definitely not...but they are pretty fabulous). I made these over and over again mostly because I knew this recipe by heart and all the ingredients were usually hanging around our house at any given moment, and because they are dang yummy! I really hate baking because of the need to exactly measure things and have all ingredients (I once made cookies without the baking soda & I do not recommend it!). I much prefer cooking because you can experiment a bit more, not as many constraints and I have never been one to follow rules just because they are there. Plus, you can add four times as much hot pepper as required:) Cooking is me, baking is not.
Alas, it is rather ironic that I have become known for my baked goods here. This week I shared some banana bread muffins with some neighbors while Anni and I were visiting a friend and inviting people to an Easter dinner we are hosting at our house. The next morning on an early morning run an older women I had never met stopped me and told me that someone had brought her a muffin and that she loved them. She then came over later that night with a armful of avocados and starfruit from her shamba and told me that she was giving my these so that I would make her some banana bread. Gotta love the bartering. She was very sweet to Annikah and I was happy to oblige.
That same afternoon I was walking home after taking the dala-dala into town and another neighbor who we buy mandanzi (African doughnuts) from told me some loves the keki (cake) and wanted to know how I learned to cook it and could I teach her. One of the helpers at Annikah's school rides his bike over to our house some days just to see if I have any made and invites himself in for some. What is funny is that I have shared these before but apparently I am getting better at making them. Then today my good friend from down the street called me and said she needed to borrow my muffin pan because she had her sister in law over and wanted to make banana bread for their family celebration. She stopped over and I wrote the recipe down in Kiswahili the best I could (plus, she has seen me make it before). She grabbed the pan (and my whisk and some vanilla) and was on her way to impress her family with MY recipe. Ok, definitely not MY recipe but I did steal it from a cookbook, tweak it, and it is now in high demand around these parts. They especially love it when I tell them all the ingredients are local and the reason they are so yummy is because the spices here are AMAZING! Jason says if we ever are really strapped for cash I could sell them in town. Although, now that I given away the recipe I may have to find another fallback. In a world where I so often feel like I lack knowledge and expertise my little banana bread muffins have given me credibility and some cause for celebration. 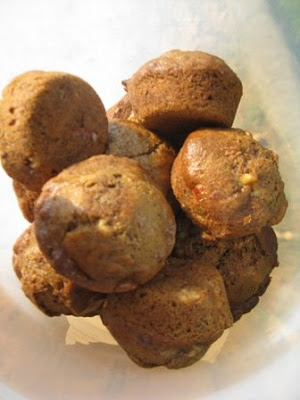 Bake at 375-ish degrees for as long as it takes.
I use a muffin pan for individual cakes
(Mostly b/c our oven heats so unevenly that a bread loaf rarely turns out)

jkww said…
good job rox! those look yummy! reminds me of that episode of "friends" where monica makes the candy for her neighbors and pretty soon there is a line out the door all day and all night from people wanting more and more and more. you could definitely have a side business ;)
3/4/09 2:36 PM

Beck said…
Hooray, the bananna muffins that could! Good job Rox! The best part about your recipe is that you can use other local fruits/veges - try zuccini, apple sauce (sub the oil with extra apple sauce). Durian has a similar texture. Although you don't like Durian muffins, the locals might just FLIP OUT! Try it.

Bibi Ronnie said…
Sounds ymmy! Can't wait to try them. I got Anni some birthday party stuff today for her 3rd birthday! All princesses, of course. I got favors for 8, but plates and cups for 16, thinking parents need to eat too. I will bring it all in June. I even got her an outfit an crown for her big day! Wish I could be there then.
3/4/09 5:14 PM

Gma Rho said…
Those mufffins are beauties, and the recipe with all of the added spices sounds yummy! I will try it. Thanks for sharing!

Hey - are you game for some friendship bread starter??? Remember your experience baking that? You have come a long way, baby!!
3/4/09 8:38 PM

Lola said…
Oh, I love your BTS bars! And I would say they just about live up to their name...Ha! Now I am craving one, so if you ever want to share that recipe, I would be a willing recipient.

I share your thoughts about baking. I like to cook, but baking is way to precise for me. How great that you doing so well with the banana bread, though! That is awesome. I bet you never thought you'd have a banana bread outreach.
3/4/09 9:47 PM

Griffen said…
Just LAST NIGHT I was talking to Reid about some friends who have a womens' group, but they say they can't seem to come up with a good money-making idea. I told him I could probably just teach them how to make banana muffins and set them up with a good steady income for life!! Too funny.
4/4/09 12:42 AM

Meghan Baird said…
I totally feel ya on the cooking vs. baking thing. Scones are my worse enemy. soup, chilis, stir-frys, that's where it's at! But good work on becoming the Martha Stewart of the island!!

We're pr aying for you and Jason. Hope you are feeling better. Just wanted to let you know I tried this recipe today - made some muffins and a loaf to share - but not before eating a good portion of the batter. Yummy! Thanks so much for sharing it.