Annikah's favorite part of us getting a new fridge was the box.
A huge cardboard box: Oh, the possibilities! 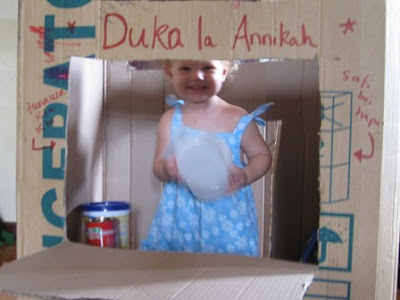 We helped Anni open her very own duka (shop) and she know loves selling empty containers of anything and everything to anyone that comes over. We started calling it the "elfu moja" store because when asked how much any item is; in English or Kiswahili she responds with "elfu moja" or 1,000 shillings (about 80 cents). Everyone who sets foot in our home must shop at Duka La Annikah. Really it is not a matter of choice. She is quite a considerate duka owner as she presents you with fake pesa (money) we made together and a shopping bag before escorting you to her duka window to make your purchases. Most times she even gives you more in change then you paid. Jason thinks she need some business management skills before opening any more franchises. Although she may have more skills that we initially thought....the other morning when I asked how much an empty container of oil was she responded "elfu tatu" (3,000 shillings) but when a Mswahili friend asked about the same container Anni said "elfu moja" (1,000 shillings). Looks like even Annikah gets the concept of white price! 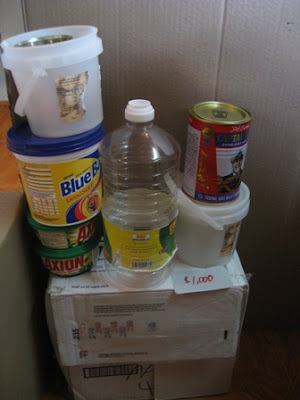 Bibi Ronnie said…
How absolutely darling. It reminds me of the children's museum we would take her to. I see at Costco huge playhouses, and complete kitches that I wish I could get for her, and here she is just as happy in her little box! What a great imagination she has. And what a creative Mom she has. I can't wait to shop!
17/4/09 2:13 AM