blast from the past

On Saturday we finally made it back to the village we built houses in 5 years ago on a Habitat for Humanity Global Village trip(consider that a plug!). We had been talking about going back since arriving but wanted to wait until we had enough language to communicate. We finally made time and it was a great experience. We traveled with our friend that also was a fundi on the site and the dala dala driver that took our team around 5 years ago. It has been awesome to reconnect with them as well and they have been coming over to spend time with Jason a lot. We drove out and parked the car near where we knew the village was. Although some things look a bit different we immediately recognized everything..."this where we ate lunch, this is where the dala dala parked everyday, that is where the rock we peed on was, etc" We walked a while to the first site we remembered building on and saw the finished house that is still standing! When our team started it was only coral rock foundation and after a couple weeks of building it was almost done (except the roof). Now is still stands but the owner was not there. 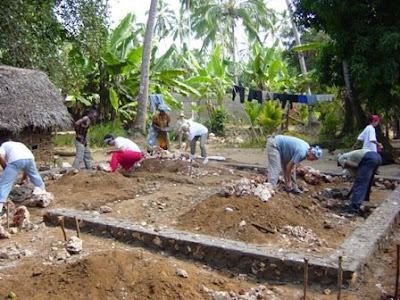 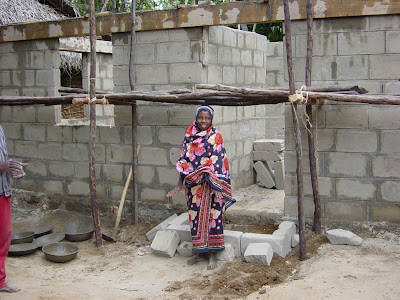 the house almost finished the day we left 5 years ago 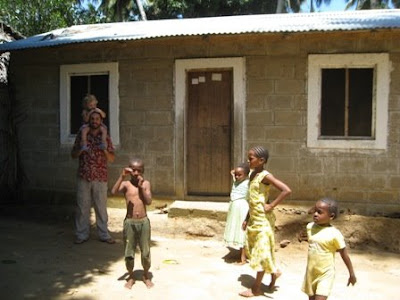 The house today! Even though we helped build it it is still standing!
We talked to some neighbors and took some pictures but did not really recognize anyone. We were kid of bummed at this point as we thought that maybe folks had moved. Our friend suggested we walk over to the other area where we had worked on two homes. After a sweaty walk we arrived and right away I recognized the Mama of the village sitting in a doorway. She recognized us as well and we greeted each other. I showed her the pictures we had brought and she shared that her husband; the Mzee of the village had passed away. Within minutes several more women and tons of children appeared. Three of the children I knew the moment I saw them even though they are so much older now. We showed all the children the pictures of themselves when they were only 2 or 3 and they loved seeing themselves. Two little girls I had bonded with during our trip were both there and we got to spend time with them and see their homes. I had brought banana bread muffins for everyone and after some women pulled out a mat under the shade of some trees we ate and shared stories about life over the past few years. They said they were very impressed with our Kiswahili which we would hope because last time we were there we could ask for the bathroom, more water, and say bricks please. So at least we have moved up from that :)We heard about the homes being completed, the families, who has passed away, who has moved, what brought us back, and schools for the children. They even remembered us teaching the kids duck-duck-goose or as we named it "kuku-kuku-jugo (chicken, chicken, rooster)." It was crazy to see how much is the same but also to hear about and see the community development the women in this area have spear headed. Given the cultural boundaries to women in leadership I think they are all rock stars! The hospital that was in the planning and beginning building stages when we were here is finished and now provides a much needed birthing center, care for women and children, as well as medicine and help to those living with HIV/AIDS. Although it was closed because it was Saturday they proudly took us on a tour of the outside and told us we needed to come back when it was open to see everything. 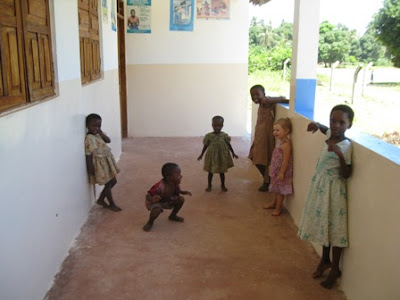 The kids play outside the hospital 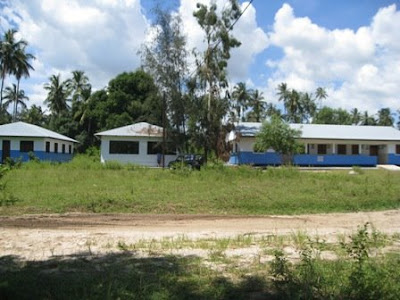 It was amazing to see and spend time with people we thought we would never see again! God always surprises me! I vividly remembered one little boy named Omar because of his outrageously joyful and huge smile. He would chase after our dala dala everyday as we left the work site until his small little legs would almost give out. He was no where to be found though and when I asked about him some kids quickly got up and said he lived in the next village and they would get him. About 20 minutes later he appeared, same precious, warm smile, just a few inches taller. It was a highlight to see the children. A reminder that the vitality and hope of a community is the children. After a couple hours we left with lots of invites to come back and promises to return. They did say I have to come back to teach them to make the banana bread...I am telling you the secret to cross cultural relations is in the mkate wa ndizi! We hope to return soon! A well spent Saturday afternoon. 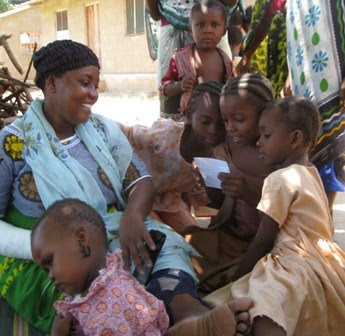 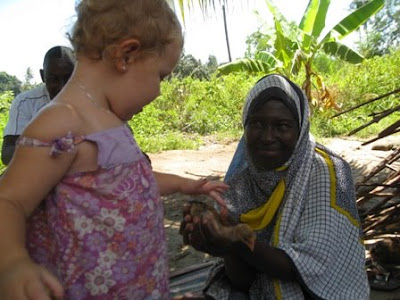 Anni got to pet a baby chicken! 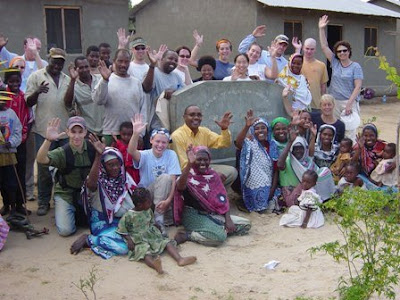 5 years ago our team with everyone from the village! 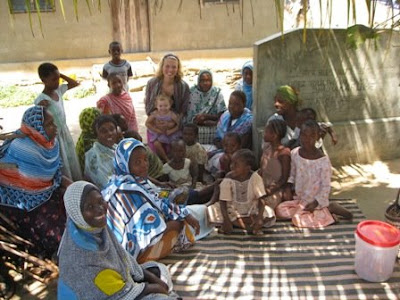 same place as 5 years ago pic...in front of the Habitat sign
Anni and I with the women and kids today! 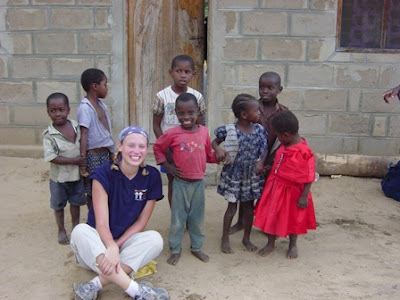 Me with the kids 5 years ago....can you find the same kids in the pic below? 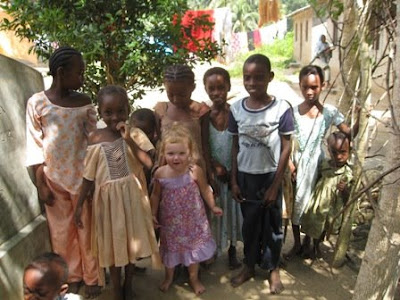 This time Annikah was the one making lots of new friends
Email Post
Labels: building habitat for humanity village

jkww said…
ahhhhhh!!! rox! you got to go back to kiabamvua! i'm so jealous! (i'm sure that is not how you spell it, but whatever). i wondered if you would ever get to see them again, and see if our little house is still standing. what an amazing trip we had. i'm still so thankful that i got to be there with you, and that i can picture the places and people of the island and smell the smells and hear the voices when you describe them.

your banana bread is bringing the world together.

Bibi Ronnie said…
Katy made your banana bread for Mom's Day weekend. It is very good. Maybe you can start your own Dunkin' banana bread store! Really neat that you got to see the old village.
21/4/09 5:57 PM