Annikah is pretty darn entertaining. Of course the two's are a bit rough for at least part of everyday....whining, fussing, emotional outbursts for no apparent reason (hmmm, wonder where she gets that?) but in general we are loving seeing her personality develop and most days she says at least one thing that cracks us up. Here are a few random stories and updates that I want to record lest I ever forget the Anni Joy of right now....

I am pleased to announce that Miss A is now newly improved and Nuk-free (or binky, or pacifier or as our UK friends say dummy). We decided it had to go a few months back but where too lazy to force the issue (we like our sleep). When she was a baby she rarely used a Nuk but around 1 1/2 got pretty attached and "needed" it to sleep. I know that may have bothered some folk but since I have many crutches (that we could go into at length at a future counseling session) I figured let the girl enjoy it at least during sleep times and long car trips, etc. But in recent days it has become more of an addiction. She needs to know where it is and we find her sneaking it especially if we would discipline her or something would stress her out. We made a pack a while back to yank the Nuk after our long trip on the mainland (hey, some silence during a 9 hour car trip is precious). When we got home I followed advice of a Mom I know here and snipped the end of her Nuks. By snipping them I guess that the sucking is no longer is soothing and many kids simply give them up on their own. Not my child. She would bring me the Nuk and say "Mama, it is broken, fix that." But even when I explained that I could not fix it she still wanted it. Plan B. We decided to go for the whole "IF you give up the Nuks....THEN.....you will get a super-duper exciting-make-you-want-to-jump-up-and-down-and wet-you-pants gift." Now some would choose to call this bribery. I am one of those people but we just wanted to sweeten the deal a bit and kick the habit once and for all with minimal dissension in the ranks. So we asked Anni if she wanted to "do the deal" and explained there was no going back. She quickly collected up all her Nuks and placed them in a plastic bag and then came up with the idea on her own that she wanted to give them to baby Joel (our team leader's new baby) which I thought was pretty sweet. She added "baby Joel need them Nuks, me no need them because me a big girl." I agree. Then she got her present; a cheap Dr. Kit we found here a few months back and saved for such an occasion.
no nuks = dr. kit

The best part is that now that it has been over a week I think I can say with certainty operation: bribe the kid was a success. She asked for them for a few days but we reminded her that we gave them to baby Joel and that she did not need them. She even found one Nuk yesterday, a straggler hidden under her bed, and came right to me and said "Mama, this for baby Joel." Her Dr kit is a big hit as well. She loves playing "(insert baby or stuffed animal or Elmo) is sick and me pray for them and them need to go to the doctor." The sweetest part is she always says she wants to pray for them and then after a quick stint in her expert medical care and taking some dawa (medicine) "Mama, look Jesus heal them." I guess with all the sickness we have had here in recent months she is so used to talking about being sick, doctors, and healing. At least her approach seems sound; pray first, then seek medical help, then wait on God. 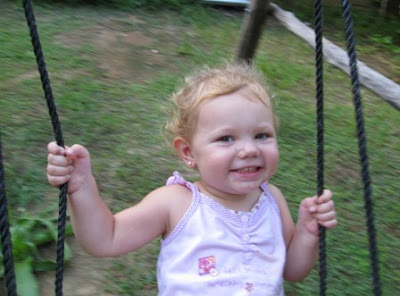 Annikah is such a girl. She notices things. Things of monumental importance like"oh, my friend wear a dress" or "me like her pretty hair." She also always has to run to Jason after getting her hair done or putting on a dress and say "Papa, say Annikah look pretty?" Every girl loves a compliment. This week she came running into my room while I was getting dressed to tell me of some tragedy against mankind perpetrated on her when she stopped suddenly, stopped whining and said "Mama, me love those new chupis" then added "which Grammy sent that?" To which I replied by busting out laughing that 1. she noticed that I indeed was sporting new chupis and 2. that in her reasoning all new things come in a package from generous Grandmas'. The funniest part is that they were sent in a package (from dear friend Jill- thanks!) since I have not dared to brave the used chupi market as of yet and nicer new ones are pricey. At least Anni is starting young at the fine art of appreciating new chupis.

My favorite Anni story of this week came after she saw me showing a local friend here our wedding video (only the highlight one that is 4 minutes long, I would not even sit through the 6 hour version). My girlfriend wanted to see it after showing me a 3 hour video of a local wedding of her family member on another island. Very insightful and interesting but that is a story for another time. So she came by to see ours which we had burned to our laptop hard drive. Annikah walked in the room and was enthralled. She kept telling me "Mama and Papa get married" and "Annikah was there." I quickly pointed out that she was not only NOT present she was not even thought of at that point. She responded "why me not coming?" as if our not inviting her was some major oversight or harsh cruelty. She now asks to watch the wedding video almost everyday always followed by a statement like "me want to get married and have a movie." When I explained that she needed to wait until she was older and God brought the right man that loves and cherishes her she silently, thought about it and then shouted "me can marry Papa." In her mind he fits the qualifications. We are lucky girls.
Email Post
Labels: growing healing local dress nuk sick

Bibi Ronnie said…
Tell Anni Grammy is so proud of her! What a big girl she is since we last saw her. Her praying first is so sweet. I love her on the swing. Is there one close by? I know how she loved the paaark. Wish I could bring one of the playsets or little play houses they are showing here now for spring purchasing.
6/3/09 11:49 AM

jill said…
first, of course, i am so pleased and proud to know that dear little anni knows a good pair of chupis when she sees them!!! that brings me a great deal of joy =)

second, roxi dear, i miss you and anni and these stories are so precious. i'm glad you're recording them. reminds me of the baby books my mom kept, only you have much cooler stories than "jill discovered that she scissors can cut her own hair".