If you want to learn about a culture; listen, observe, learn the language, ask questions, sit, eat, celebrate, mourn, and spend time with people doing what they do. At least that has been my approach by default since arriving here. This weekend we made some great memories celebrating with our neighbors here.
A neighbor invited me to accompany her to a local salon on Saturday. She was going twice over the weekend to get two different hair styles for the 2 day wedding she was attending (weddings are a huge deal) and said I had to come with her. I was excited to go as I have wanted to go into a local salon but felt a bit intimidated as well as being unsure if they could "do Wazungu hair" so I was happy to accept the invite to join a friend. She made me promise over and over I would go with her and we planned to meet on Saturday at 1pm. After rushing home from a team day to be home in time I sat and waited and waited. When we first moved here I sometimes would assume people blew me off but now I know better, 9 times out of 10 they are just late. She finally turned up at 4pm and after she changed clothes we headed to the dala dala. Now, if I was 3 hours late I would walk briskly to my destination but we must have greeted at least 6 groups of people on the way (and by greet I men stop and chat with). We finally walked to the dala dala hand in hand (this is another thing I am getting used to.... friends hold hands, men with men and women with women, it is not a sign of romantic involvement at all, in fact husbands and wives NEVER would hold hands in public). After getting off the dala dala and a few more stops ("this where I bought my shoes for the wedding" and "this is where our other neighbor's son lives") we arrived at the salon and after leaving our shoes outside entered barefoot. The women inside seemed pleased I actually turned up and tried to suggest that they dye and cut my hair. After politely turning that down (Yikes! I am adventurous but not that adventurous) we finally compromised on some braids. One of the women ran out of the salon to go buy some hair while another women started greasing me up. I can honestly say I never thought I would be a user of any Nice 'N Lovely product but there is a first time for everything right? 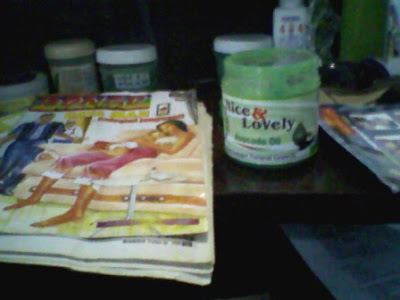 When she returned with what can only be described as dark brown hair we all had a good laugh because that was the lightest color she could find. Before she started I made sure to ask how long it would take since I had to return home to attend a little girl in our neighborhood's birthday party with Anni and Jason later (of course when we were invited they just gave a general time of day jioni "the time before night" so i was not sure exactly when we needed to show up). I was told the braids would take about an hour. When will I learn? 3 1/2 hours later I was still sitting in the chair. I was at the salon about 4 hours and it was definitely an amazing time of cultural learning. First of all, everyone spoke only Kiswahili the entire time so it was great language practice for me as I tried to catch pieces of every conversation and chime in when I could. They talked about husbands, boyfriends, shopping, fashion, their kids, the news, music, who had died, tons of general gossip, and a bit of trash talking as far as I could tell. Not much different than a salon stateside. My favorite moment was when they started talking about a certain type of jewelry. They started to explain that it was something you wear around your hips to attract your husband...when you are wearing nothing else. Everyone started giggling and shhhing each other when a man walked in and they said it was a siri kwa wanawake (secret for women). And apparently my friend did a quick measurement of my waist and hips to make me one. She told me she was wearing hers right now and every married woman should have this little secret. Swahili lingerie...I totally get it! By the time I left I was so late for the party but I was grateful they let me in on their girl time. And this is what I look like these days..... 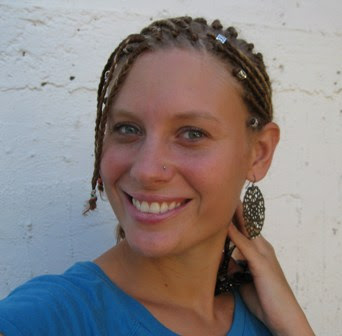 I had to run to catch a dala dala in the dark and head home to try to make it to the party. Of course my phone was not working and I knew Jason and Anni had already gone to the party I was nervous I would not find it. No worries, as I ran down the street there was so much noise coming from one gate and house it was obviously the place to be. I quickly slipped off my shoes and entered what can only be described as complete and utter chaos. Kids running everywhere, balloons, cups, candy wrappers covering the cement floor, and loud music blaring. I immediately saw Jason and Anni (not hard to spot:) and while Annikah was having a blast Jason seemed a bit overwhelmed. I felt pretty bad because he was the only man for a while until some other brave souls showed up including the birthday girl's father (who we had never met because he lives with his other wife in town). The birthday girl was dressed to the hilt with jewelry and a beautiful white dress. Poor girl even had malaria but was still up for a party. The women from the neighborhood noticed my hair right away and said one of my favorite Kiswahili phrases "Umependeza" (you have made yourself beautiful). If a friend gets henna or a new dress or their hair done everyone notices by saying umependeza. It is a great phrase.
The birthday party was packed out and they had bowls of food for everyone (potato balls with coconut sauce) and juice. They also sang a birthday song followed by all the kids dancing like crazy (Anni liked that part). Then the kids and adults grabbed balloons and popped them (Anni did not like that part). While opening presents the little girl stood there while the aunt and mother opened each present and dumped them into a big pile. It was super fast and all the other kids would laugh at certain presents. They also had one of those cakes with a barbie doll smack in the middle and icing as the skirt. I gotta say the people here know how to throw a party. We each were given snack boxes and a bag full of treats when we left (every event you have here you always send extra food home with your guests). When we left at around 9pm there were still people there and there were kids running everywhere in the neighborhood. You never really know whose kids are whose because of the communal nature of families. Everyone watches out for every one's child. I was so bummed as our camera decided to stop working (the flash is totally busted) so all I have are a couple cell phone pictures but I think they capture the fabulously fun chaos.
Through cornrows & cakes I learned a lot about culture this weekend. 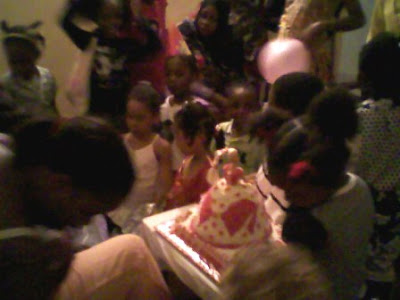 lots of kids & chaos...what every great party needs!!
check out the Barbie cake! 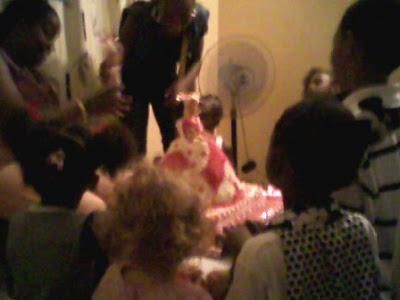 sarah said…
ahhh!!! I LOVE IT!!! you are WORKING that nice n' lovely. woman, you are an inspiration. I want cornrows!!

PLEASE provide updates on the cornrow evolution--I'm fascinated to hear how they work, how long they last, etc!
18/3/09 11:21 AM

Gma Rho said…
The cornrows look great on you -even in brown. Of course your nose ring only adds to the look! The time thing is wild - I was surprised the salon was still open when you arrived. Do they ever close?? How much do they charge for 4 hours of work?
18/3/09 11:44 AM

Roxanne said…
I negotiated b/c i seriously only had a certain amount on me, but the whole thing, the fake hair, rubberbands, and the work was about 8 1/2bucks, Crazy huh? The worst part is they itch like crazy & I have to wrap my head up every night. small price to pay for getting to hang out with the ladies:)
18/3/09 12:33 PM

jill said…
rox, i think that picture of you is one of my favorite EVER! you look amazing and happy and glam and very 'rock star' in the best way. nice job on the adventure-seeking!
18/3/09 12:57 PM

Beck said…
Umependeza Indeed! the nice and lovely will help as in a few days time your head will itch like crazy due to dryness. Do you wear a do-rag at night now too! Funny. Send pictures of your secret wife thingy~! Maybe it looks like the shingles we wear at Zumba class! haha.
18/3/09 2:03 PM

Love that photo - somehow, with your hair away from your face you look a lot like Jorie and Annie!! All three of you are gorgeous ladies!!
xoxo
19/3/09 11:15 PM