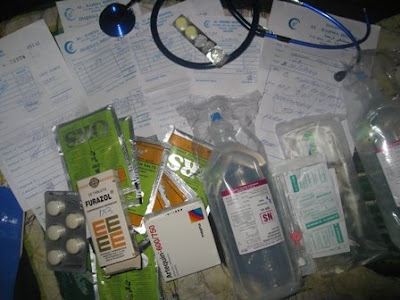 Once again I am finding it difficult to practice what I preach. In a definite UN-coincidence last week Jason led a devotional time on learning to trust God through trials and to persevere, that He often teaches us through difficulties and wants us to grow, even if sometimes it is painful. We had some pain this weekend, mostly Jason but I never realized how scary it is when someone you love is sick and you can not do much to help. Of course, compared to many this was not a huge trial but for me I am seeing that I have a lot to learn about trust.
Deciding that Jason, being the introvert he is, needed a day off from family and work I sent him away to walk in town, grab a coffee, sit and read, whatever on Saturday. Annikah and I had a girl's day. He returned very early for someone who was kid-free for a day at around 2pm while Annikah was sleeping. He said he started to feel really bad and needed to rest. That morning he had woken up with body aches and another unpleasant but all to common issue we face here. He really has not felt himself since November when we had all the health issues. Within an hour his temperature had spiked to 104 and he was visibly shaking and looking terrible. We quickly headed over to our team leader's home for a RDT (rapid self malaria test) which came back negative. In a way a relief but also very worrying as his symptoms of diarrhea, chills, fever, circulation issues and body aches, etc seemed to be getting worse. Our team leader took him to a local hospital (so Annikah could avoid being there) and stayed with him for almost 4 hours while they ran numerous tests. As I made Annikah dinner, cleaned up, gave her a bath, read stories, and put her to bed I was getting worried that everything was taking so long (usually a trip to the doctor takes less than a hour...before you get jealous you also usually end up with the wrong medicine or find out nothing). After a call from our team leader he said Jason was still there because his blood pressure had dropped severely and they wanted him to have fluids. They had to buy the fluids, meds, and needle (to make sure it was unopened) and they were going to stay while they ran more tests. I was worried. What the heck was wrong? and why were there never any clear answers? I was relieved that our team leader who grew up here and speaks the language was there to help. All sorts of thought flooded my mind as I sat alone waiting to hear any news. If I thought anyone would struggle with health issues after moving here it was me. I am the one who has had too many surgeries to count, I am the one who everyone knew by name in the ER, not Jason. After some moments of silence that is what was what hit me. This is not supposed to be Jason. He is supposed to always feel great and be able to rescue us. He should not be sick, especially in a new and scary place. I realized how much I take for granted our health, without which we cannot function in our daily life. I suddenly got more of that vow I took almost eight years ago that has rarely entered my mind but some who struggle so much more know all too well; "in sickness and in health." I needed to be reminded that can go both ways. After another hour Jason arrived home, looking a little better but still pretty rough along with about 5 prescriptions and tons of medical supplies(see picture). He had not needed fluids because he had hammered down some re hydration salts and his pressure came back up (but we know have them just in case). The outcome of all the tests was that he has a bacterial infection, something that can be common in living in an environment so foreign to our bodies, but nonetheless concerning. I monitored his pressure throughout the night setting an alarm to make sure we did it every few hours and it seemed to be staying in a normal range. Neither of us slept. It is hard to not feel guilty because you are healthly and watching someone you love suffer. Jason turned to me at about 4am and said "this is the worst night of my life." It was terrible for him and all I could do was bring him water and just be there. But I guess there is a lot in the just being there and of course praying. I also tried to make him laugh a bit by telling him "if you die I will kill you" (not at all kidding :) He feels much better after 2 days and hopefully will continue to improve. We have an appointment to see a doctor on the mainland during our trip there next week as well. We still hope to understand more of what is causing this and that he will kick it's butt once and for all!
There has been much blessing in this; our team leader's generosity and his ability to help in providing medical supplies, Annikah has been great, our team support and prayers, and above all knowing He is in control and has a purpose for everything.
Email Post
Labels: health sick

sarah said…
sending much love! it's so amazing of both of you to be able to see the big picture in the midst of a bacterial infection. you are both so great, and we hope you feel better soon.

Bibi Ronnie said…
I tried to call this morning but no one answered so I was worried. Then I had to change all of Gma's appointments for tomorrow and took Gmp to his skin cancer doctor. When I picked him up, I found out Gma fell at 12:30 last night again. He was so tired that when he tried to step over her, he fell too. Luckily he had already called 911. There is a huge snow storm here, and when I finally got him home, the paramedics were there again because she didn't stay in bed, and fell again before we got back from the doctor. Her surgery will be Thursday! I feel your pain in trying to help someone you love, and you can't seem to do anything for them. At least Jason accepts your help, and isn't falling every other minute! They will live to be 90, and the stress of taking care of them may kill me before the week is out! :)
I so pray Jason is better, and just pray you and Anni don't get this bacteria too. Daddy can understand his worse night, because that is how he felt two night with the stone. I sure hope 2009 gets better soon. Love you all so much.....Mom
12/1/09 10:57 PM

Michelle said…
Roxanne-just catching up on my reading, and I am so sorry Jason is still feeling poorly (or feeling poorly again). God tests our grit in times like these, and it bring us closer to eachother (and makes us value eachother) and closer to Him. You are a great mom and wife, and together you will get through anything thrown your way. We're all always thinking of you and praying for you... Hope everyone is feeling well and that you get to the bottom of whatever this is, and soon.