Annikah and I both got a new look this week. Annikah got her ears pierced and I got some henna. I think my henna was more painful.
Since arriving here most people have mistaken Annikah for a boy because she does not have earrings. Seriously, all little girls here wear dresses everyday and have their ears pierced at around 3-6months. After numerous people asking and asking why she did not have her ears pierced I think she started wondering as well. She would ask me "mama, want to have earrings too." I started looking around to see if there was a safe place that we could get her ears pierced. I would have waited if we were stateside but we figured if she wants to fit in who are we to say no? As long as I could find a safe and clean place and we made sure to explain numerous times that if she got them pierced it would hurt for a little bit. She would hold her ears and say "that hurt" so we thought she understands. I finally got a recommendation for a jeweler that had prepackaged sterilized studs and a piercing gun. Annikah and I took a Dala Dala ride into town and searched out the place. Once there she picked out her pair of studs; gold plated ones with a cubic zirconia in the center saying "Anni like that, that pretty." Once the man with the gun came near she was beginning to feel the pressure. When he marked the dots on her ears she flinched waiting for the hurt part. After one stud was in she was in tears but he quickly did the second one and with the promise of fruit snacks she stopped crying in about 30 seconds. The jeweler said she did better that most kids here (I totally attribute that to fruit snacks bribery). As we walked through town every time there was a window she wanted to stop and look at her new earrings. It was pretty adorable. Jason picked us up in town and she showed him her earrings and told the epic tale "Anni has earring but that hurt papa." She also wanted to show off her earrings to everyone in our neighborhood once we arrived home and the crazy thing is people noticed right away, even people we did not know commented that Annikah had hereni (earrings). We cannot believe what a big girl she is with her earrings. Jason said "no more things that make my baby look big." Needless to say, Annikah is very pleased with her new look.

picking out the studs
30 seconds after the dreaded gun.....
fruit snacks in hand save the day!
showing off her new look

My new look is temporary but I think arguably more painful that Miss A's new holes in her head. When I invited my shoga (girlfriend) to our Christmas party she insisted that I needed to get henna for the celebration and for Krismasi. She called a friends and "made an appointment" for Friday and said she would come to get me around 9am and we would take the Dala Dala to a house and both get henna done to celebrate Christmas. She actually showed up around 8am and I was still in shorts (gasp!) from doing Taebo so I had to quick jump in the shower, get Anni ready for school, and we headed off. The house was not far away and once we arrived there was discussion about many things, from what I understood; we came too early, there was a wedding later that day so many people were coming for henna, and either a chicken or someone with a name similar to chicken was sick. We then moved to the kitchen floor and one of the women started doing henna on my feet first. There were probably about 6-10 other women in and out, collecting water, taking care of kids, and getting henna as well as us. Women everywhere are masters of multitasking, the women doing my henna was breastfeeding her son, doing henna, talking on the phone and making chai; seriously amazing! The craziest part about the process was that it was much more intricate than the first time I had henna done and took about 5 hours!! I actually had to leave for a team meeting and wobble home with some henna still drying. My back is still recovering, beauty is painful! I was lying, sitting, standing, and squatting in the most bizarre positions (of course wearing a skirt.....will the stupid Mzungu moments ever cease? ). My favorite was lying on my stomach with both hands in the air (to let the henna dry) and both feet up while they were finishing painting the inside of the outlines on the bottom of my feet for about 40 minutes......add that scene to the list of things I never could imagine I would be doing. I must admit the results are pretty beautiful and everywhere I go people notice and ask why I have the henna so it is awesome to share that I am celebrating Krismasi! So Annikah & I both have new looks just in time for our party today & Christmas! 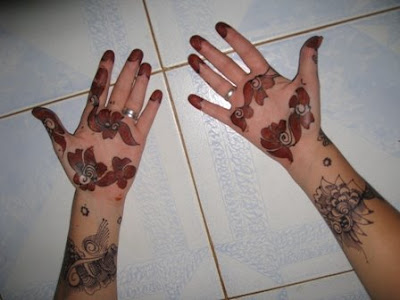 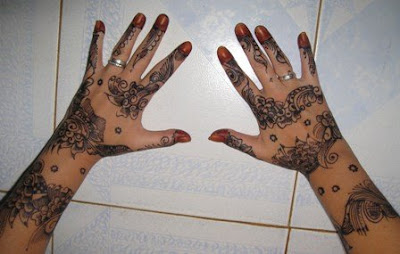 jill said…
whoa! anni looks darling (and very grown up) with her new earrings! and your henna is amazing. very beautiful, even if it was an arduous journey =)
20/12/08 9:49 AM

Unknown said…
i love anni's new earrings.. she looks adorable!! my favorite part is hearing the little things she says... precious. the henna is beautiful, too!
20/12/08 10:11 AM

sarah said…
love it! SO beautiful, both you and anni!!!

Lola said…
Did you ever have the thought, "What if this isn't really henna and is permanant?" Ha! It's really beautiful. You could seriously be on L.A. Ink.

Bibi Ronnie said…
Anni looks so grown-up and proud of her earings. The henna is so detailed. I can't imagine sitting still that long in 97 degree weather. Can't wait to hear about the party.
20/12/08 6:56 PM