the departing of a dear shoga 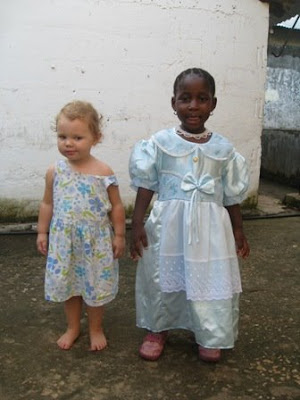 Since we have arrived we have felt that it was such a blessing that Annikah found such a great friend that basically lives with us. It may sound trite but seriously we often said how thankful to God we are that she had found a friend so quickly that she could play with and learn from especially during the difficult transition. They have spent everyday for the last few months running around and playing together, starting at 7am until they go to bed, inside the house, outside the house, going on adventure walks, getting into trouble, everything that best friends do. Mgoray even went with us on several car trips and the sound of the girls giggling in the back seat would warm my heart as we bumped along the road. We found out a few weeks back that her parents were sending her to the mainland to live with family. We were devastated. Really devastated. We tried to prepare Annikah for this eventuality. Annikah asked to pray every night that "Annikah's friend stay here." It broke my heart as leaving Chicago we said goodbye to so many great friends and family but she was still a little young to really take it all in. Here this is her best friend, her shoga (girl friend in Kiswahili). Her family explained that she was leaving because she has been sick quite a bit here on the island and has had trouble sleeping. Since most of their family is on the mainland they asked for counsel and their parents insisted that Mgoray come and live with them. We tried to help (offered to help with medical bills and prayed for them) but we knew we had to let them do whatever was right for their family. I think the respect due parents in this culture plays a big role in the final decision to send her back to where the family is originally from. As the day of their departure approached we tried to explain to Annikah everyday that her friend was leaving soon. Part of me desperately wanted to somehow "fix" the situation so that Annikah would not have to say goodbye, so that she could avoid the whole sadness thing. My first reaction to any pain is always to flee like mad.

But as the day grew closer we also realized we had an opportunity to help Annikah learn a valuable lesson in life; that not always does God answer our prayers the way we think He should, in my experience quite often He does not, but He promises to hear us and He has a plan for us, a plan to prosper us. Each night as a family we started asking God to help keep Mgoray safe and to bring new friends for Annikah. We told her it was ok to be sad. Annikah prayed the sweetest prayer each night "Jesus, please Annikah have new friends." In a way that has been my prayer too since arriving and I felt with her the desire to feel safe in relationship. It was a raw process to watch my daughter struggle with sadness in really understanding that her best friend in the whole world right now was leaving and we do not know if we will see her again. We coped by talking about it a lot and by giving gifts (a favorite coping mechanism of mine). Annikah wanted to give her the zawadi (gift) we were saving for Krismasi (Christmas in Kiswahili- isn't that great!) we have had for months. It is the exact Cabbage patch kid that Annikah totes around everywhere. Well, except that it has dark brown skin. Friends from home searched everywhere (thanks Kim!!) and found this doll a few months back and included it in a care package. We let her give the cabbage patch kid to her early so they could have a week of playing with their watoto (children) together and then she could take her to her new home. It was awesome to watch her open the doll, there is just something magical about little girls and dolls. She did not understand that it was for her to keep at first but we explained and her Mama explained again and once she understood she ran around celebrating and squeezing it tight. Annikah and her played for hours the first day she had it, pushing the "twins" around in Anni's stroller and taking turns feeding them rocks they found outside. After Annikah came in for the night I watched Mgoray through the window just staring at the doll and touching her face and clothes. Most of the dolls you can buy here are cheap imports and they always have white skin so we were so excited that she could own one that looks more like her. Her parents said to us with shock "mtoto ana ngozi neusi kama Mgoray na mtoto wa Annikah ana ngozi neupe" (the baby has black skin like Mgory and Annikah's baby has white skin). We also prepared a care package for the long ferry trip and many bus transfers to get to their destination. Annikah chose some stickers, a whistle, a picture she colored, some candy, and even one of her beloved fruit snacks to place into a crumbled brown paper bag that we spruced up with a purple ribbon. Jason volunteered to drive them to the port and once the car was loaded up we told Anni to say goodbye. She ran outside in front of about 8 locals that had gathered to see them off and gave her rafiki the biggest, tightest squeeze with a big kiss right on the lips and said "love you Mgoray." Everyone laughed at the sweet display of friendship and they asked us to take a picture of them together (above). Annikah has said goodbye to her best shoga here and we will miss her so much. Annikah and I learned that even if you move half way around the world God is faithful to bring dear friends into your life.

*I treasure the above picture because (as many locals that were her when it was taken commented) Annikah looks like an African kid with no shoes and a dirt covered face revealing evidence of many fabulous adventures outside and her friend is dressed to the nines about to leave on her journey to the mainland. 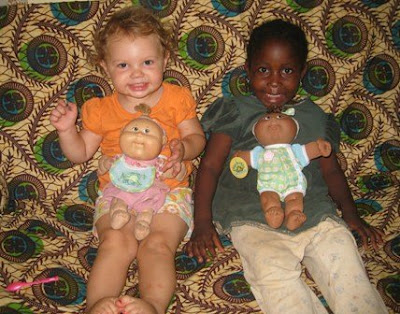 Unknown said…
ohh.. this post made me cry! annikah is so sweet and tender-hearted. i love hearing the sweet prayers she prays. how amazing that 2-year-old can understand and value a friendship... SWEET!!
8/12/08 8:16 AM

Bibi Ronnie said…
Poor little Anni. How sad to lose her live in friend. I hope she can find a new shoga soon. Now more than ever, I'm glad she'll, have Elmo Alive to keep her company for awhile. He gives hugs, so tell her they are from Grammy. I thought years from now they might visit again. Be life long pen pals or something. How sweet her prayer are. We are praying for her here too.
8/12/08 2:42 PM

misskatiez said…
i have tears in my eyes having just read this. i love the idea that your mom posted - how cool would it be for them to be pen pals!

and seeing that that i've been the loving the quotes by other people...here's one from girl scouts :) just for anni

make new friends, but keep the old
one is silver and the other gold
a circle is round, it had no end
that's how long i want to be your friend
8/12/08 5:35 PM

Anonymous said…
oh i just teared up reading this post. god bless anni and mgoray and their beautiful little friendship... no matter what lies ahead, they'll never forget one another as they've both had profound impacts on one another's lives.
8/12/08 11:44 PM

Gma Rho said…
I, too, am one of those who had tears from this post. Anni is so grown up to run and give Mgoray a hug and kiss and tell her she loves her. How precious, and how heartbreaking. Would you be able to go and visit Mgoray one day?
9/12/08 9:12 AM

Meghan Baird said…
Awww, that it so sad about Anni losing her friend. Tell Anni I'm praying for her to find a new friend too! <3
I'll miss those adorable pictures and videos of the 2 of them as well.

BTW, I heard that you're getting the Janders + Ryan for Christmas. Have fun with the ABO crew. I come out in Feb and hopefully we'll get together sometime too!
9/12/08 4:09 PM

Lola said…
I teared up reading what Anni is going through. The loss of a dear friend is tough at any age, no? What a sweet and special little girl.
9/12/08 7:30 PM