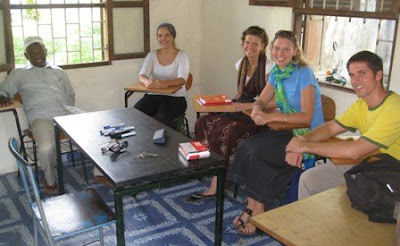 We have the sweetest teacher for language school named Mohammad. It is a really small class of 5 people all learning Kiswahili for various reasons (a gal from Holland who is living here with her boyfriend who is a musician, an artist who was raised in Africa, and a gal from Netherlands who is working on the mainland). Our teacher cracks us up daily. He has several mannerisms and quirks that I adore. One is that everyday he brings about 12 dry erase markers to class. Now, why does one person need that many markers to write with? It because 11 of them DO NOT WORK at all yet he brings them all each day and then goes through each one no less than 20 times throughout the course of the class. Last week he finally chucked a few out the window during the lesson. It just makes me laugh that he will not just throw them away and only keep the ones that work. 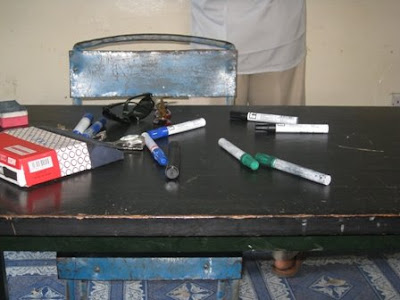 He also tells us stories of his kids taking a rat to school to play football with it (ok, animal rights lovers out there I am not condoning said behavior but after seeing the size of the rat lurking outside our house a few days ago I might be willing to drop kick the thing too) and that before he went to teacher college he would pop his students on the head when they would not listen (glad I am on the "after" side of that one). His English is awesome, of course as he is teaching Kiswahili to a bunch of Wazungu but there are certain things no matter how long you speak a language you will never say as a native speaker (good for me to keep in mind). For example, he sometimes says marginally funny things that produce a smile or chuckle from the native speaker crowd like "the food it is for finished" or "my soda has been rotten" or "breast (he spelled it brist) is painful" but today was the best one ever. He wrote on the board a series of sentences we were to translate into Kiswahili and this was one of them...
"She has not shitted in the bed"
Seriously, and that is what he meant. This was hilarious for obvious reasons and we all had to attempt to not burst out laughing. Added to it was the fact that Annikah has indeed had diarrhea in her bed for the whole of last week so it was a useful phrase for me to learn. Also, later Jason and I discussed what a better translation would be and we could not really come up with one except "defecate" which is a very tough word to "come across" when you are learning English. Again, I will say never a dull moment here.
Email Post
Labels: language school

Bibi Ronnie said…
You should give him one of the markers that erase the other color, like I gave Anni. That would really drive him nuts! Sorry Anni is still feeling poopy. :( Have you got the fridge fixed yet? I can't even imagine living without one in 90 degree weather, and Jason with a fever off and on. He looks good in pic tho.....
17/11/08 12:43 PM

Karen said…
Nice blog, Mama Annikah!
I'm impressed that you get all this done inbetween kiswahili lessons, grocery shopping at the market, cooking and everything else that just takes alot of time here..
but p.s. I'm from Norway, not Holland ;)
Hope to see you both again:)
2/12/08 10:08 AM