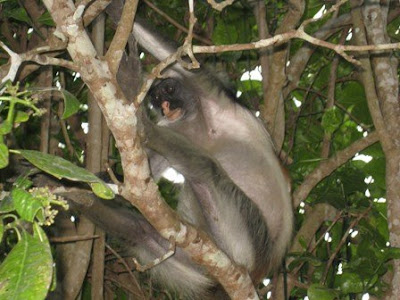 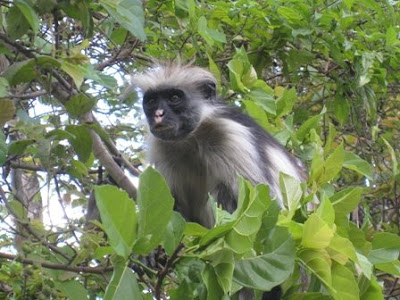 Last week we took the advice of some friends here and drove out to check out a national forest about an hour away. This forest is the only place on earth that Kirk's red colobus monkeys are native and as we learned on our walking tour there are about 2,500 total in the world with 1,000 being here! The species is endemic to Unnguja and has been isolated from other red colobus population for thousands of years. They are a protected species here and known locally as "kima punju" or poison monkeys as it was believed that animals that ate them would lose their fur, and trees and crops would die if the monkeys fed off them. They may also be called this because of their inability to digest sugars from ripe fruit. They have four chambered stomachs that can digest unripe and toxic fruit easily and they even eat charcoal. We were expecting to maybe catch a few glimpses of the monkeys high above us in the trees but as the video below shows we saw them up close and personal. We felt as though we were IN the cage at the zoo (I wish the video was a high quality but alas the Internet here does not allow for me to upload videos that are of any decent size but I hope you can get the idea). One of the monkeys even came down to say "hi" to Annikah and assaulted her by grabbing at her leg (while we realize of course monkeys can be very dangerous we had a guide with us and these monkeys are very used to people). Annikah was a bit terrified but after being held by us and thus restoring her faith that we would not allow the offending monkeys to raise her as one of their own she kept asking to "see monkeys again" the rest of our hike through the forest. We also walked down to a mangrove swamp that was beautiful. The mangrove roots are so strong you can stand and walk on them. It is amazing to get to see God's creation here, so vastly different from our normal but so rich in creativity and depth. 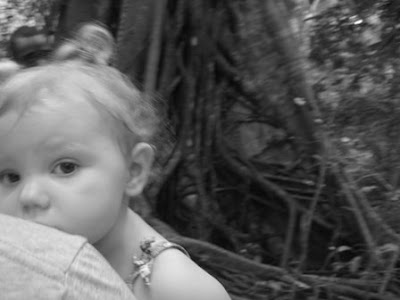 Anni in front of the amazing roots of a massive tree 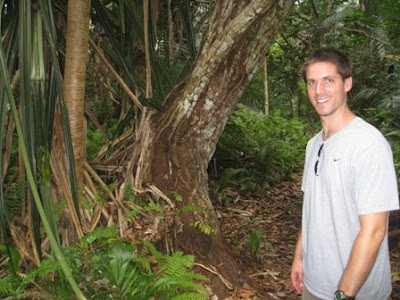 Jason in front of the "local Viagra tree" 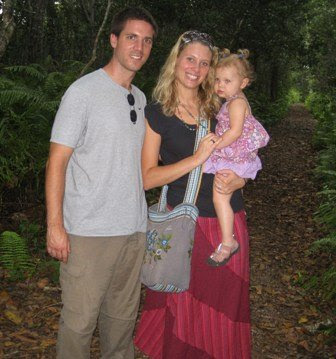 on our forest hike 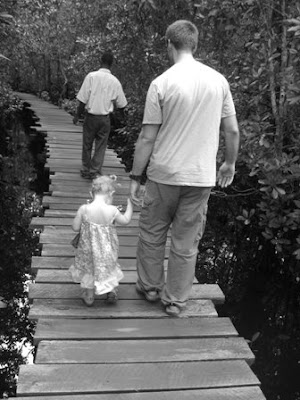 Annikah & Papa walk along the bridge in the mangrove swamp 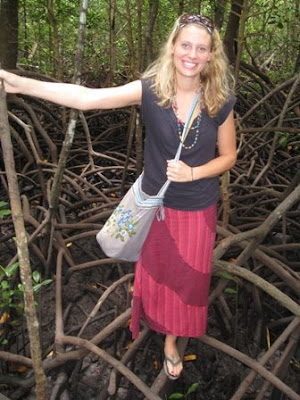 standing on the mangrove roots, those suckers are strong!

Anonymous said…
SO CUTE. The monkey that grabbed Anni must have just recognized one of his kind! haha jk. Your experience there seems to only be getting more and more exciting. So happy that Annikah is lucky enough to learn and grow abroad in such a thrilling environment. While you are surrounded by monkeys, I'm surrounded by crazy college campus squirrels. haha Love you and miss you all, Auntie Katy
8/10/08 10:19 AM

Bibi Ronnie said…
Glad you can see so many new and different things and creatures. I should have Sheryl paint these kind of monkeys in her lake house room.
8/10/08 4:38 PM

Stan and Jess said…
so cool! Did they throw anything at you? The monkeys in South Africa were like annoying squirrels that would throw things at us. PS - I sent a package a week ago so about another week 'n half it should be there. Barter low there is nothing too exciting to pay a lot for!
10/10/08 8:04 AM