I have been a bit quiet lately on the blog front because I have been crazy busy as I am teaching at a nursery school this month. Long story but here is the shortened version ...after being here for only a couple months I realized that if I really want to learn the language I need time to attend school, study, do the computer program and practice with a helper uninterrupted. Now, all mamas out there know we are the queens of multitasking, not only because we can accomplish a ton at once like replying to an email, returning a call, making a grocery list, entertaining a toddler, and cooking dinner simultaneously but mostly because we have no choice and stuff needs to get done. I have been trying to do just that with mixed results and most days I feel exhausted as I try to attend team meetings, practice language, build relationships, adjust to life here, and hang out with Annikah. Something just has to give if I am going to be able to be a full time and productive member of the team here. Because we are moving forward on the school (more to come but exciting news as we have the location and blueprints) I NEED to learn Kiswahili.

I started asking around to some other Mamas I have met and heard about this nursery school founded by a South African Mama so her daughter would have a place to interact and learn. I called her we hit it off immediately but the problem was that even though the price is ridiculously low compared to the states (it is non-for profit and only costs about 140 dollars US a month for five half days a week) we still could never afford that at our current salary. She asked a bit more about me and upon discovering I am a teacher and taught preschool stateside for a year all but begged me to help her out. She has hired a new teacher for the school but she will not be here full time until November and the current teacher had to quit because she is pregnant, sick, and heat is too much for her (I am not pregnant and it is too much for me most days so I have sympathy!). So they have been trying to cover the school with parents filling in and the result has been a lot of exhausted people and a bit of chaos for the kids. She offered to barter for my teaching help for this month; I would teach for the entire month and then Annikah could attend the school for 3 months full time or 6 months part time. She even threw in breakfast and lunch everyday at a really nice hotel for us to make it easier (no fast food here so having to cook 3 meals after teaching would not allow me much time for anything). After talking it over with Jason we decided we simply had to jump at the offer. Of course I wanted to help the school out after visiting and seeing the awesome potential and I am really excited about the opportunities Annikah has to interact with other kids from around the world (many of the kids are ex-pats from around the world (Italy, UK, India, Tanzania, Poland, Kenya, Mozambique) and then some local kids who are sponsored to attend). I teach in English but there are a few kids who only speak Kiswhaili and the helpers are all local people so it gives me a chance to practice language as well. Last week I had to explain why a child was in time out in Kiswahili I think I manged to say something like "no bite friend, wait here." Hopefully he understood, at least he stopped biting. I absolutely love one of the helpers named Mama Theresa who has 12 children of her own, she is so patient and loving and teaches the kids Kiswahili songs that I am trying to pick up. She has showed me the ropes and is so appreciative to have a teacher with her now.

I will only be teaching for this one month so I can focus on team stuff and language but for now I am loving being with the kids and feeling more like myself by teaching again. It is also pretty amazing that for our "active play time" we can hit the beach or explore the ancient ruins next door to the school. Annikah has loved all the new activities although she has had a few rough days adjusting to me being the teacher of so many other kids I think it is setting in now as a few days ago she came home and told Jason "Mama is teacher." I have started doing a circle time with the kids everyday where we count in English and Kiswahili, say our ABC's, and then my friend the monkey comes to talk with us (I am using a bath washrag puppet that we brought for Anni and his name is Mr. Kima, no worries I learned my lesson) and he tells us about the special letter of the day and tells us stories of his escapeds through the jungle. Annikah loves this silly washrag puppet so much that on Friday when he kissed the kids goodbye she started wailing. She is such an emotional wreck...wonder where she gets that? So for now I am the mama and the teacher. Here are some pictures of Annikah & her new rafikis: 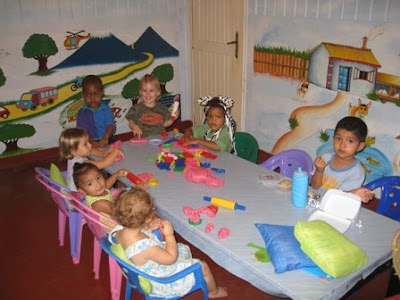 Annikah & her new rafikis playing with some homemade play dough 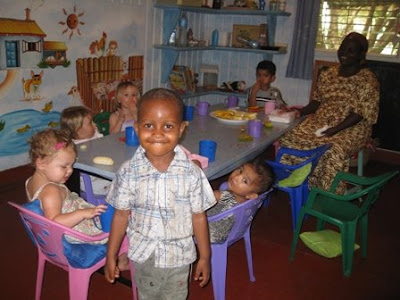 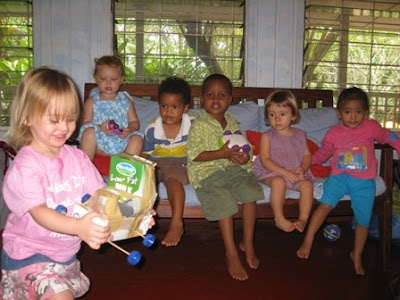 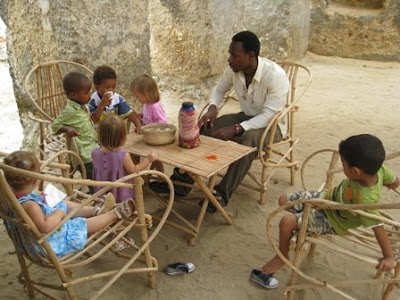 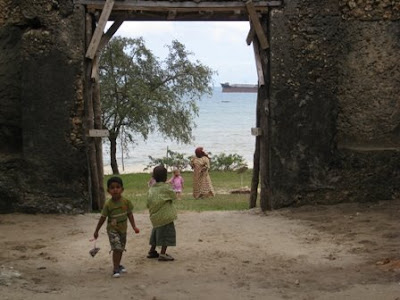 exploring the ruins next to our school 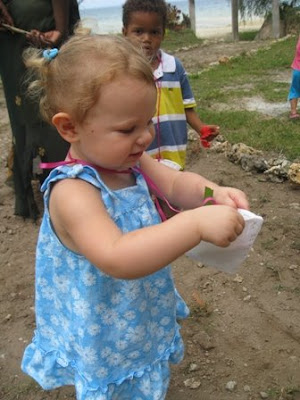 Bibi Ronnie said…
What a great experience for you and Anni. I'm sure she loves seeing more kids. I'm glad you get to teach again, because you are sooooo good at it.
12/10/08 3:36 PM

Gma Rho said…
What a perfect opportunity for both you and Annikah. I'm sure you will thrive with this chance to use your creativity and teacher skills. I'm happy to see that Anni is wearing one of her grandma-made dresses!!
13/10/08 8:44 PM

Jorie said…
Wow- this is just amazing! What a blessing for both you and Annikah. I'm glad you have found a place to perfectly use your gifts. Love and miss you!
16/10/08 11:32 PM