Annikah turned two on Sunday, we realized in African time she actually turned two on Monday. We knew this would be the first major milestone in our family's life here and we wanted it to be special. I love parties, crazy, loud, eat way too much, fun with friends parties and I prayed that Annikah's second birthday would be special especially we are feeling homesick and miss our family and friends. The day turned out to be an amazing blessing as we were surrounded by new friends to celebrate Miss A's b-day.
We decided we needed to have a party and invited our teammates, Iddy's family, the family we stayed with a few weeks back, and then some of our neighbors. Of course we really had no idea who would come as our verbal invites were usually in broken Kiswahili but we tried to explain that we were having cakes, coffee, and tea to celebrate Annikah’s big day and they were welcome to come celebrate with us. I spent all day Saturday (about 6 hours) baking various treats. I wanted to make sure we had enough cakes and cookies in case everyone we invited came and Annikah has been saying for weeks “two cakes” when we talk about her birthday ( I guess she thinks how old you are corresponds to how many cakes you get and I am willing to maybe indulge that for one more year tops). It is always a bit stressful hosting a party but I think there was an added element of living in a different culture; What are birthday parties like here? Do they celebrate them at all? What would people expect when they come? Would anyone come? How would we communicate? We did our best to prepare and knew God would have to take care of the rest. I mean, it is not that deep right; just a kid’s birthday party. 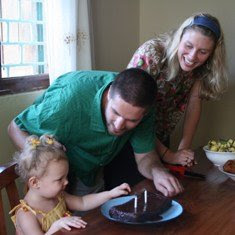 Annikah loves her cakes, the cherry chocolate was her fav! 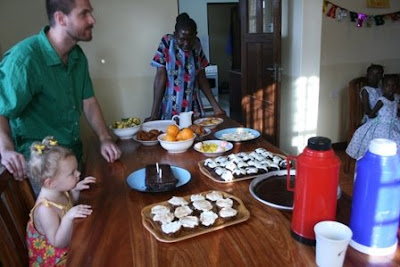 the spread of cakes & treats!
Some of Annikah's rafikis from the neighborhood that celebrated with us 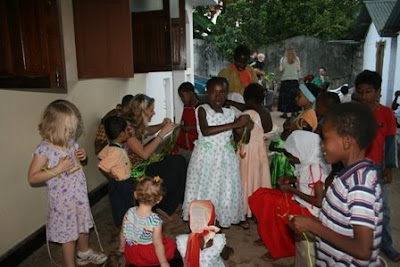 me & the kids (watoto) making pasta necklaces (that is the side of our house)
showing off their necklaces
Blowing bubbles
some of Anni's gifts
Email Post
Labels: birthday africa

sarah said…
rox, this melted my heart!!! I thought of you this weekend, and am SO GLAD to here you were surrounded by loving friends on this special day.

Bibi Ronnie said…
So glad to see that big Birthday smile and pigtails on our little Big Two year old. I was thinking about her all weekend while we were driving from one place to another. I wish our box had gotten there so she could have had her gifts from us. I just wish we could have been celebrating with her, and so sorry she got sick.:(
Grandma fell again yesterday, but is ok. Katy went back to school today. Now I'm home alone wishing I could get an Anni hug!!!! The doll dress that matched look so cute! Love you all.
2/9/08 10:55 AM

jkww said…
Rox! That's so awesome! I was thinking of Anni this weekend on her special day. I'm so happy it was so fun and crazy, just like any good party should be =)

Mark said…
Wow, that looks like a great party. Anni looks so cute in her pigtails. I had to update her Mii to give her some hair. :-) Looks like you guys have a ton of friends already - totally exciting. Joel and Silas wish Anni a very happy 2nd birthday!
2/9/08 1:09 PM

Gma Rho said…
Oh, the celebration sounds wonderful. You must have been overwhelmed that so many guests showed up. Your hard work was appreciated by them all, I'm sure. Gpa and I spoke of Annikah many times this weekend, too, as we were thinking of her turning two. She just gets cuter all the time. Her curly hair and smile are just precious!! I hope she liked the magnetic dolls we had given you for her before you left; and also we sent a check for her to your ING account so she can shop locally!! The matching dress is darling. Birthday hugs and kisses from me an Gpa Jim!!
2/9/08 4:15 PM

Laura S said…
We all say happy birthday, it looks like it was a fun party with lots of new friends. One of the kids at Joshua's party did drink the bubble solution, it must be a crazy American kid thing! Love to all of you!
2/9/08 6:19 PM

Lola said…
What a little sweetie! Ani looks just adorable...so happy on her birthday! You get mad props for throwing such an awesome party. I miss you and your great ideas for fun times. :)
2/9/08 10:01 PM

Anonymous said…
ADORABLE! Wish i could have been there to celebrate, but it looks like the party was a big success. Give Anni two big kisses from her auntie katy!
2/9/08 10:22 PM

Michelle said…
Such kindness and joy carries you through the harder times :-) And what a wonderful Mama Anni has that would cook her cakes twice so they would be just perfect...
HAPPY BIRTHDAY MISS ANNI!!
3/9/08 2:22 PM

benjaminhsieh said…
Happy birthday Annikah! I was waiting to see what kind of marvelous party you would throw. She looks so beautiful in her dress and pigtails. We're praying that God would show his love towards Anni in little ways each day. love ~ Rebekah, Ben & Ava
3/9/08 3:00 PM

Good work and tell Anni Happy Birthday for me! She looks soo cute in these pics! Glad you all are having fun jammin with your neighbors. <3
3/9/08 3:59 PM

Unity said…
THanks for the posting--looks like Anni had a wonderful day with new friends. You are of course a rock star putting it together (sorry about the cake frustrations!!). We think of you all often & are praying.
3/9/08 5:22 PM