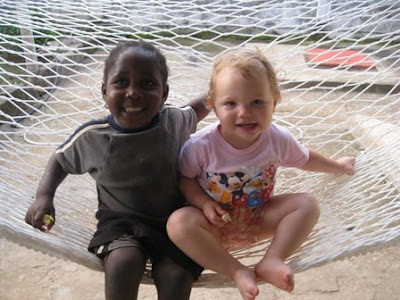 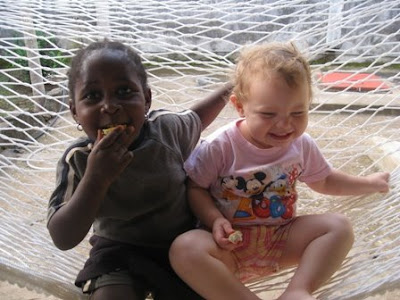 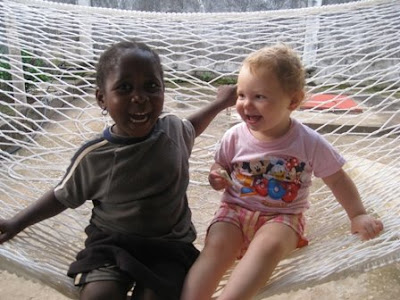 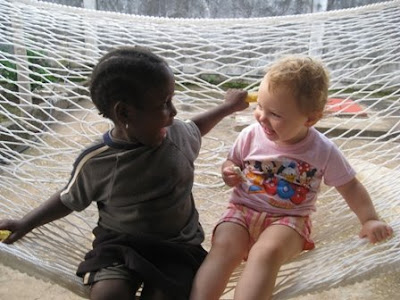 A good friend. There was no possible way I could decide which picture I liked the best so I had to post them all (and thanks to Jason's tireless efforts to get the Internet I think we are now in business although I fear speaking ....errr typing too soon but for now we are on-line). Thank you all for your comments, you really have no idea how encouraging it is to felt connected through this screen and box of wires even though we are so far from home and all things familiar. Asante Sana!! Many have asked what a typical day is like and I will soon post more details (as soon as we have a typical day :) but I wanted to share a few adorable things that happened yesterday.
Lest anyone think we are working tirelessly on language and house set up and team stuff let me assure you we have also taken breaks, a few trips to swim at the beach, and yesterday Jason hung his hammock (although in the afternoon sun we realized that spot will simply not do unless we want to develop skin cancer and overheat everyday). These pictures are of Anni and her rafiki testing out the hammock. They are truly friends and I am amazed at how they are learning from one another each day. Yesterday Annikah came in the house from playing outside and went right up to Martha (our house helper) and said "wapi papa?" (wapi means where in Kiswahili). We all about fell out laughing as she has obviously been soaking up some language. Her friend has also been learning a bit of English as they play as I heard her yelling "more" just like Anni always does when she wants to play hide and seek again. She also started saying "cheese" when I take out the camera getting her cue from Annikah. This added vocab is particularly hilarious as it really makes no sense even in English as to why we say cheese, I guess except that it produces the desired facial expression for a Kodak moment. They do not even really have a word for cheese in Kiswahili since no locals eat it (a real tragedy I think:)). So, we are learning and although our efforts at language are a bit more directed, guided, and goal orientated Annikah has definitely showed us that learning a language does not have to be so serious.
Email Post

Unity said…
Oh my goodness--I just love the photos of miss anni with her rafiki--they are simply adorable. I am smiling ear to ear just looking at them.
4/9/08 9:32 AM

Leah said…
Kev and I love getting glimpses of your days there! Thank you for sharing. I'll make sure Kevin sees this update, as he'll be excited you have Internet too! :)
4/9/08 12:59 PM

Bibi Ronnie said…
How cute to see both of their smiles. It proves that a friend can be a friend even if they don't completely understand each other. Years from now, they may have pictures standing side by side after graduating HS or something. So cute!!!!!!
4/9/08 3:02 PM