Well, we all knew there would be more but who knew so soon? The stupid Mzungus strike again except this time I am pleased to announce it was not me. My only role was watching the whole ordeal unfold from a front seat window in our house.
Jason borrowed a friend's van to go pick up a table and chairs set that we had made for our house. He and our Mlinzi James unloaded the chairs and brought them in with no problem. The van needed to be moved a bit in order to fit the table out the door. As I watched from the window I seriously thought someone was carjacking it as the van reversed so incredibly fast and smashed right into a concrete railing around a planter in our driveway. When I ran out to see what was happening it was Jason behind the wheel and James who was sitting in the back of the van was wondering what the heck Jason was thinking (as was I). Jason said he thought his foot was on the brake while it was clearly on the gas by the force of the van hitting the cement. There was not enough time for him to react in order to stop the car. It was one of those moments when you wish you could go back 30 seconds in time for a redo. I felt terrible for Jason who has been feeling yucky this week and was running around trying to do so much that day. The accident was a result of a bit of carelessness mixed in with very small and tightly placed car pedals combined with the strangeness of driving a German car in an otherwise British driving land. In the short battle van vs. cement planter the van clearly won which is great because ordering parts for a German van will not be cheap at all. Because the back door was open when he reversed the only damage was a shattered back light. The cement was not so lucky. We have no idea how to fix that. 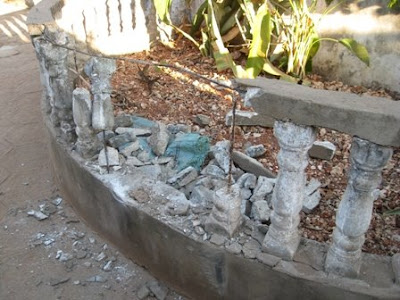 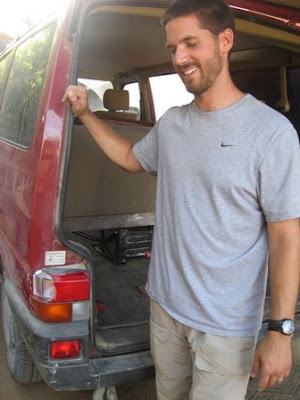 We dreaded making the phone call to the friend from whom we borrowed the van, and of course offered to pay for the damage, but he was very understanding and had coincidentally already had the exact same part on order in Germany for a friend, which he can bring back down in December after a trip home. So.... the adventures of the stupid Mzungu continue!! Stay tuned for more.

Bibi Ronnie said…
Poor Jason! I'm glad the van was okay, but the pretty rail is sad. He seems to have a problem driving, remember hitting Daddy. But that was Daddy's fault. I'm glad it wasn't you this time. Men always approach things differently if they are responsibile.
25/9/08 11:06 AM