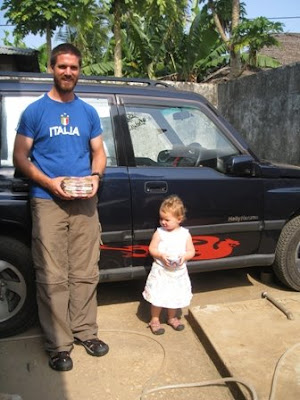 We have a ride! Jason has been looking at used car after used car for a few weeks now. We initially thought we may be able to get by without a car but it is basically impossible to run any errands or meet with people without one given how rediculously crowded and slow the dala-dalas (public buses) are here. We still walk as much as possible and Jason will ride his bike for errands closer to our house but having a car will really help us in getting around the island since everything is rather spread out. Once he found a couple used cars we thought would survive the harsh road conditions necessary to get around here and ones that seemed as though they were not about to spontaneously combust he started the negotiation process. A friend here who is a bit of a gearhead also helped look at the engines because lets be honest Jason is no auto mechanic. Cars here are very expensive as they are imported on shipping containers from Dubai which more then doubles their cost. The good news is that cars hold their value here or potentially appreciate with a few years of use. So after the initial sticker shock we knew it was a worthy investment.

The car is a 1996 Escudo. It sat in our driveway for a week while Jason made payments to the owner. The owner kept the keys until we paid the full amount but since we can only withdrawal 1 million Tsh a day from ATM's we had to go everyday and wait until we had the full amount. Who ever thought we would pay for a car in cash that cost over a million! We pray that the car will treat us well and that we can also explore with a bit more freedom now. I secretly think Jason really felt partial to this car because he feels James Bond-ish with the red flames across the side, like maybe the next time we get partially submerged in water (a story for another time) a scuba snorkel will immediately ascend from hood and the wheels would give way to secret, hidden paddles (can't you smell the testosterone?). Ok, maybe not. There are also Liverpool football team seat covers and stickers inside and outside which is particularly hilarious as we know absolutely nothing about football except that stateside we call it soccer.

I am excited as well as terrified to learn how to drive here. Jason has been driving a friend's car for a few weeeks but I have yet to beef up my courage to drive as the traffic rules (or lack there of), opposite side of the car steering, and opposite side of the road driving have pretty much kept me happily sitting in the back seat with Anni. I am itching for some freedom and wanting to learn how to get around here and since my usual directless self still gets lost in Chicago after living there 7 years I figure I better start now. 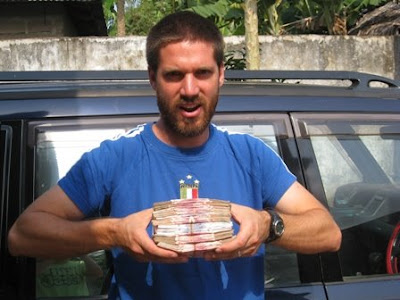 Here is Jason right before paying off the car with loads of cash, 7.7 million Tsh to be exact. Really Jason rarely has loads of cash in hand and is not a money hungry gangsta despite what this previous pic suggests. Maybe that is why we feel compelled to document these events, we simply cannot believe that we have in hand this much cash and are not fleeing the country for illicit behavior (at least not yet :). So our big news for the week is we have a gari (car) and the Wzungus are about to hit the roads! Watch out!!
Email Post

Laura S said…
Congrats on the new car! I do love the flame decals. Can you just see Andy driving something like that. He would wonder where his nice, urban sedan was! Keep us posted on your adventures in driving. You are very brave!
15/9/08 1:39 PM

Bibi Ronnie said…
Looks better than ol' blue. Glad you have a car to have some freedom. What is the water story???
I'm glad you're on an island, because if you had all of Africa to roam with your sense of direction, it could be bad. Maybe Anni like Katy can get you home.:)
15/9/08 2:56 PM