chupis, a table, & goggles: a big day for Annikah

Chupi is a great Kiswahili word. I am recommending that you adopt it and use it with fevor! It means underwear and since longtime readers of this blog know my aversion to the p-word for underwear in English I am so excited to have a fun new word and want to share the wealth!!
On Wednesday we picked two fabulous parcels from Grammy Rohrback and they were full of fun stuff for Annikah and us. Included inside were two packages of brand spanking new chupis. And not just any chupis but girly Elmo chupis. Annikah screamed with joy and ran around in circles after seeing them. She even made it wearing them without an accident for about 2 hours last night. We are hoping they will inspire some peeing in the potty around these parts and I am pretty tired of lefting her 28 pound butt up to change her.
It was a big day for Miss Annikah as we also picked up her handmade table that we had made with generous birthday funds from Grandparents and Uncle Rob and Aunt Annie (asante sana-thank you!) It is really adorable and it has already gotten a ton of use. A hand made wood table and 3 chairs made exactly to our specifications in a week for about 35 dollars!! A perfect venue for creating masterpeices of art or having a rafiki around for juice. 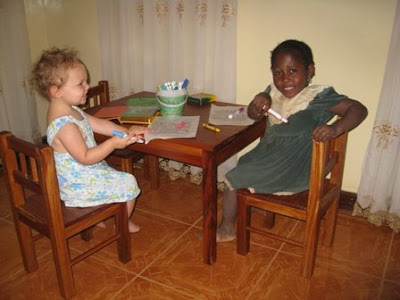 So after the excietment of the table Anni could hardly believe that when she woke up from her nap we had more fun stuff to open (we did save a few things for surprises later but I could not resist opening most things). Grammy also sent some new swimsuits and a pair of Finding Nemo goggles that Anni refused to take off ("like Papas"). Since I learned a long time ago to pick my battles carefully she was allowed to eat her entire dinner wearing them: no harm there right? Just a weird kid. 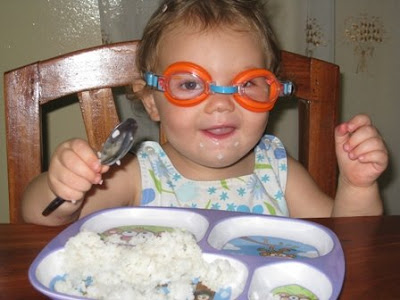 I do not know who was more excited Annikah or Jason when he saw his W Cub's shirt (the Cubs win flag). Jason will proudly wear it to support the Cubbies, you can take the boy out of Chicago but you can never take the Chicago out of the boy!! 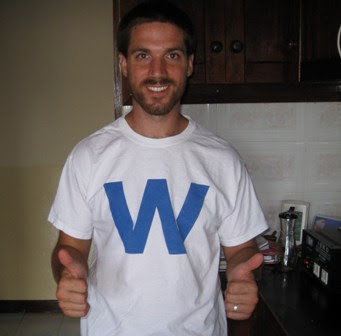 A video of Anni enjoying her two favorite items from the package: Thanks Grammy!!

Bibi Ronnie said…
Tell Anni I love her KISS to Grandma! Sooo cute! I hope Elmo does the job! Glad Jason liked his shirt, especially after being sick and hitting the wall. It was worth the postage just for those pics and kiss! Hope you liked your stuff too.
26/9/08 12:50 AM

jill said…
i dance around in my new undies just like anni! guess i never remembered to grow out of the 'new undies' joy =)

Beck said…
That was just delightful! Annikah and Ais sound a lot alike. Underwear and goggles - who knew. I can't wait to show this to Ais.

sarah said…
chupis! I love it!

what a doll; i love these videos. yay!

missing you, girl! I am just getting ready to go for a run--I always go right past your house and think of you running in your long skirt! no matter how sorry for sweaty self I feel, thinking about you puts things in perspective. AND, more importantly, thinking about makes me happy, too.

Laura S said…
Go cubs go! Now only if Joshua would cooperate! He takes after his dad and always says "Go White Sox", much to the chagrin of the Bridges clan. Missing you a ton, what a big girl in her chupis, I am letting Joshua potty train himself when he turns 6, not weird, right?
26/9/08 10:26 PM

Meghan Baird said…
OMG! Those are the cutest pics/video ever! I just LOVE seeing Anni dancing around and eating dinner in her goggles and chupis! What a cutie pie! Give her a kiss for me. <3
26/9/08 10:28 PM

Annie said…
That video is hilarious - I'm glad we could help little (well, not so little anymore) Anni get a pint sized table for her and her rafikis!
3/10/08 2:54 PM