The amazing & incredible adventures of the stupid Mzungu!

I decided I need to start chronicling the amazingly stupid things I do. Now, no doubt I do many such things and anyone who has read more then five entries on this blog know that I usually report such amazing feats of stupidity with tout de suite but these days these idiotic happenings are made even funnier because of their cross cultural flair.

Yesterday I had one such adventure.

A friend stopped by and Jason decided he wanted to run out with said friend to meet some people on the island but he needed to get something out of the car and then hand the car keys off to me so I quickly slipped on my flip flops and walked out the front door to prevent Jason from having to make a trip back inside (aren't I such a nice wife? I need points here people). I did this without checking to see if the door was locked (now here is where I would like insert partial justification for my stupidity by blaming it on Jason; something I do often and usually makes me feel better). I did not think to check if the door was set to lock upon closing it as I never leave it on this setting during the day because we are constantly going in and out so why bother? But Jason in his wisdom decided that since Annikah was napping and he was going out it should be locked (ok, maybe here is where I give my hubby credit for always thinking of our safety. NOTE: this does not mean he is not still to blame for what obviously occurred next). I walk out onto the porch and shut the door behind me to prevent the dudu (bug) army that is constantly and eagerly assembling outside awaiting entry from storming the house. It is then that I hear the click of the lock locking us out. I quickly tell Jason "J, I need the keys the door is locked" (notice how I promptly made it anyone's problem but mine). He quickly responded with a short "they are inside." Si nzuri (not good).
So here is the situation: we are all locked outside with Annikah sleeping inside. I have done this before in the states but usually I just climbed through a window which is a no-go here since the windows have bars. Next thought: wake up Anni by yelling into her window and have her open the door, another no-go as she is too short to reach the latch and even if she could reach her fine motor skills would probably be lacking in being able to pull the heavy latch open (not to mention the obvious that she would awaken and probably realize that we were stuck outside and either A. eat every snack in the house and do something naughty but oh so irresistible like unroll any TP in the joint or B. be scared that she has such idiots for parents and cry making an already stressful situation even more so. So what next? Our friend had grown up in Tanzania and he was not at all phased by the situation and quickly retrieved some tools from his car. We started hatching various scenarios, what window can we break? what about the back door? what about the roof? Seriously, maybe I have been watching too many 24 episodes but it was hilarious as we tried to figure of what we were going to do to achieve our objective. No one thought it was funnier than our Mlinzi's wife who was outside watching the whole torrid affair play out. She was laughing so hard at the Mzungus locked outside of their house with no clue as to how to get in. In fact, her and I were immediately seeing the humor in the situation while Jason was clearly a bit more concerned. From what I could understand she was telling me that Annikah would have to cook her own food but that Jason and I were welcome to sleep on the floor in her kitchen tonight. Very considerate offer but no thanks, I think we will try to get in.
After trying to break down the front door thinking we would just have to replace the brand new lock we had just put in we decided on the more sneaky, less obvious, and risky Jack Bauer approach of ripping through one of the mosquito screens on a window and then finding something long enough to put through the window to unlatch the door with the mad skills of a secret agent (ok, if it was really Jack Bauer-like we would have shot everyone else in the head first). We cut down a skinny tree-like bush thing and tried our plan. No-go: the branch was too thin toward the end and broke off inside the house. Our Mlinzi's wife; now cracking up so much that she has to bend over because she is laughing so hard, helped our pathetic selves by finding some old wires and then our friend suggested elongating our crude prodding stick with our outside broom (it has a sturdy wooden handle). We tied them together and after one attempt it was still a bit short but after one more attempt Jason manage to unclick our way to an open door. I quickly started cheering and dancing (giving more fodder for her to laugh at me but at this point why not go for broke, right?) and Jason immediately said "we need to hide a key outside." The whole ordeal probably only took about 20 minutes and Miss Annikah missed out on the entire adventure as she was blissfully asleep in her room. At least I add humor to the lives of many through my amazing & incredible adventures of the stupid Mzungu! (more to come I am sure)

*the following pictures are recreations (obviously since the whole problem was that we were NOT able to get in the house) taken after the event to document our stealth and savvy.
NOTE: Jason is only smiling because we did eventually get in. 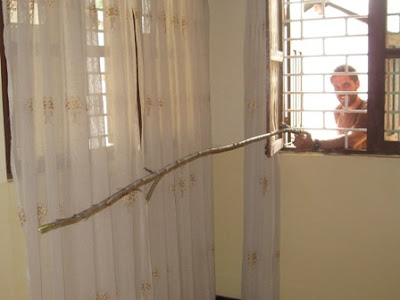 Jason attempts to show off his awesome balance & coordination 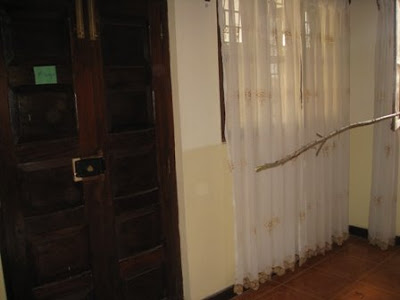 Bibi Ronnie said…
Pretty funny. I guess your guard doesn't have a key. That is the reason I love my Lincoln, because whenever I lock myself out of the car I can punch in my code and get in again. How many times did you and Rob lock the bathroom doors in the house, remember? It must be a bad gene in our family.
17/9/08 12:31 PM

Mark said…
Somehow I missed this story when it was first posted - great stuff! Way to McGyver yourself back inside. Like you said, Jack Bauer has no need for stealth, he just kicks the door down and shoots everyone in the head. I wonder how that would have gone, trying to enlist Anni's help. I am picturing trying that with Silas and I just don't know... I think getting him to open the door would be a 50/50 shot at best. If he wasn't just waking up from a nap, he'd have a better shot, but after a nap you never know what mood they're going to be in.
23/9/08 12:10 PM

Mark said…
OK there were supposed to be seperate paragraphs there. Upon reread of my post it sounds like Jack Bauer is trying to enlist Anni's help in shooting everyone in the head. D'oh!
23/9/08 12:12 PM