a piece of cake 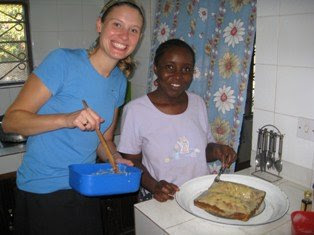 During our home stay the youngest daughter asked me to teach her to bake a cake. Since she was teaching me so many things I desperately wanted to contribute something and what she really wanted to learn was to make a cake. When I was telling her the different types of cake we have in America she was most interested in a carrot cake or cake ya carrot. I had a moment of panic because I think I have maybe made a cake from scratch like once but I certainly do not know any recipes from memory (and had no access to Internet at the time). Luckily I remembered I had my make a complete meal out of dirt and sand cookbook written by people who lived in the bush for years- good purchase from back home!! Ok, maybe not just dirt and sand but seriously this book tells you how to make ketchup, yogurt, and many other things out of ingredients that are common in Africa, a very handy book for my Mzugu self where there is no Target. The only problem was it was buried in our crates at our friend’s place so we needed to take a Dala-Dala (local bus) to get there. This trip was yet another misadventure resulting in Jason changing his mind about boarding the Dala- Dala last minute (he thought there was no room when in reality the "Dala-Dala never full" as we have been told by the locals and Anni and I were already wedged tightly in the back as the Dala-Dala sped away). Anni and myself were riding off into the sunset with NO IDEA where to get off and only a vague recollection of where our friends lived. The situation was made even more thrilling since Jason had no minutes left on his phone to call me. Everything was resolved after I got off and walked around aimlessly trying to locate our friend's place (about 40 minutes with Anni hoisted on my back) until a car with our friend came to rescue us. Ah, adventures around town, so many to tell, no Internet time or working computer to tell them. Hopefully, I can soon update about the week and a half of trying to our computer to work, the search for household items, Jason's search for a bike, and many other things that are teaching us to relax and not expect things to be done quickly (or at all).

After successfully getting to our friend's place and nabbing my cookbook I was so relieved to find a carrot cake recipe. I also had to hunt down some baking powder at the local market. When I did finally track it down it was only about 40 cents a box. When I arrived home to make the cake their daughter had a few other people that wanted to learn as well; her older sister with the twin boys, her house help, and a few women from the neighborhood. The pressure was on! I had a basic recipe but no measuring cups or teaspoons, no mixer, and no baking dish. I also had no powdered sugar but the older sister suggested we make some with the brown sugar we did have so we used a mortar and pestle to ground it up by hand and then sift onto newspaper (a process that took about 2 hours for 2 cups of sugar). While we were preparing everything a few other neighbors stopped by and guy was amazed that we shredding carrots for a cake. He was very skeptical that one could make a cake with carrots and kept laughing at me. This may sound completely ridiculous but I was seriously praying while we were adding all the ingredients. I was using my best estimations because while I like to experiment with cooking at home I am usually not a baker nor do I know anything about the local ingredients and I so badly wanted the cake to turn out well. The family had taught me so much and it was my turn to teach them something. We mixed everything by hand adding some extra cinnamon and cloves and finally located some bread pans to bake it in. I watched the cakes’ bake with a careful eye to make sure they did not burn because I had no idea what the temperature of the oven was but it was a great sign when the kitchen started smelling yummy. We then mixed the somewhat powdered sugar with lemon juice, vanilla, and some butter to make an icing for the cake. The moment of truth came when we sliced it and passed it out to the gathered crowd at the house. It was actually pretty yummy!! The older sister loved it and said to me through someone who spoke a little English “I will come back and you teach me every cake you know.” I could not help but laugh as that will not take long, let me see: one cake, done. I told them we could try a chocolate cake soon if we can find cocoa powder. It was such a blessing to me as for about 6 weeks I have felt completely unable to teach or be in a position of knowing much about anything, everything is so new to me but this was something somewhat familiar and comforting. This was by far the longest amount of time I have ever spent on some simple, unimpressive, and quite ordinary carrot cakes but it was one of my favorite experiences here so far!
Email Post

Bibi Ronnie said…
The bus situation reminds me of you getting on the subway in Boston while Grandma, Katy, and I watched the door close and off you went into the caves under the city. Talk about panic! Glad the carrot cake was a success! That's my girl!!!!!!
11/8/08 3:42 PM

Gma Rho said…
I loved this post. No matter how many cakes I've baked in my life, I've always had a recipe, measuring cups, and the correct ingredients. What a challenge!! You rock for being such a success with your baking lesson! I also think you are VERY BRAVE walking around with Anni for 40 minutes in a strage land!!!!
11/8/08 7:26 PM

annalea said…
that is such a great story. thanks for sharing your experiences with all of us stateside. i also imagine that you have offered plenty during your time so far, even if it wasn't as obvious as teaching cake baking. you are an amazing mama, a loving wife, and a faithful servant and just living out those roles is influence enough. love you and miss you!
12/8/08 9:13 AM

Mark said…
Great story, I can't believe it turned out. No measuring and no temperature gauge? Simply amazing. You are mzunga no longer.
13/8/08 12:41 PM