mystery solved...and some clean clothes too

As I posted previously our washer was busted. It gave us some hope after carrying it in here and washing two loads before it sadly ceased, no water, notta spin to be heard. At least I did not spend the time scrubbing it clean like the other appliances because I have wised up to their "I promise I will work, buy me and take me home and then spend 2 hours scrubbing me, c'mon you know you want to." Ok, maybe I am going a little nuts thinking these appliances are conspiring against us but we have the stupid things break after one day 3 times in a row. I was especially desperate to get the washer working after hand washing all of our clothes yesterday and then carefully hanging them all on our line only to then have a terrential downpour ruin all my efforts. My neighbors thought it was pretty funny though; at least we offer some Mzungu comic relief around these parts. Again, we had negotiated a one month "warranty" of sorts; nothing is written just a verbal agreement but so far everyone has honored their word. Jason called the appliance seller the next morning and he said he would have a fundi ready and that Jason should swing by and pick the guy up bring him to our place and he would work some washer magic. Once the fundi got here he basically took the whole darn thing apart and the pieces were littering our bathroom and hallway. I cannot fathom how these guys know how all these used appliances from Europe and the Middle East work but apparently they do, or at least he hoped he would figure it out. After a couple hours of Jason and the fundi trying to figure the thing out he said he needed Jason to take him back to the shop to get money from the owner and then to a hardware shop to get some piece that was worn out in the old machine. The cool thing was that in this whole process they also found 3 items lodges inside the washer; an old screw, a necklace charm, and a Swedish Krona. How crazy is that? I immediately got all Red Violin about the situation and wondered where the life of this washer has taken it, where it has been? whose dirty clothes it spun clean? Why did they get rid of it (ok, besides the obvious it doesn't work?) and how in the heck did it land on an island off the coast of Africa? Maybe there was no romantic tale and a communist threat in there but still with no TV I make up stuff. The next day we picked up the same fundi and he came, reassembled the washer with the new part, and it worked!! So after it is 3 random items lighter and one new piece heavier it washed two loads today. The best news is that I am a Kroner richer and I am happily going to stop typing and fold some clean, fresh off the clothesline clothes. 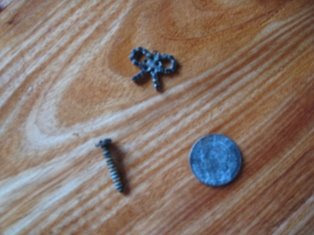 Bibi Ronnie said…
You are still my well-read drama queen. What a great story, and I am so grateful that it is now working again. Kinda of like the Yellow Rolls-Royce story too. Maybe that is too far before you were born. Anyway, I will keep praying that all of your appliances keep working for you. I too have refused to watch TV this week with all the convention stuff, so I rented "The Great Debaters". Great movie. You would love it if you haven't already seen it.
29/8/08 1:34 AM

Gma Rho said…
This is a great story. It's awesome how your creativity and imagination are really coming out now that you are living off the land! It makes me anxious for the next chapter of the story. Just wondered - do you have power all day, or just certain hours??
29/8/08 9:07 AM

Laura S said…
Yay for working washing machines, I am glad you have that modern conveinence at least. So interesting that one of the random things in the washing machine was a Swedish Krona, given your background.
29/8/08 9:21 AM

Meghan Baird said…
Thanks for the comment about keepin it real and not thinking my sweaty-self is all that bad. You're keepin pretty real yourself out there and I enjoy reading about it. I'm praying for you three! <3
1/9/08 1:20 PM