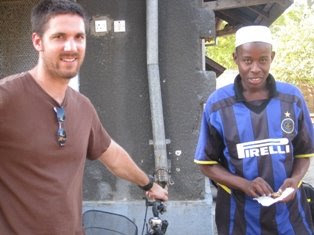 An awesome blessing to us this past week was meeting up with our friend Iddi that we met four years ago when we were here building houses with Habitat for Humanity. He was a fundi (carpenter) on our work site and was very eager to learn English. He was always making all of us laugh on the work site with his English skills as he would say very formal and round-about phrases like “I need to go to work for the sake of to get money for the sake of to go to school for the sake of to learn.” I now realize the real humor is in my Kswahili as I probably say just as many ridiculous things! Jason gave him his email when we left and they have been emailing for the past four years. When we told him we were moving here a couple years ago I don't think he ever thought we would actually be back. He sent us his phone number and Jason called him and we planned to meet in town a few days back. We took a Dala- Dala in and after a short walk we immediately recognized him waiting for us. He ran toward us (although spotting three white folks may be a little easier) and gave Jason and hug and greeted Annikah and I. He also introduced a friend that he brought with him. To our joy he still says “for the sake of” for everything and we immediately smiled. We walked through town and he helped us negotiate a trade of our cell phone (long story but we cannot find a data cable for the one we brought in the U.S and so it is useless to us for Internet purposes, so far this epic journey has been a 5 day ordeal to no avail, remember I said we are learning patience :)). We also were stopped and he was harassed for a few minutes as a man in town thought he was illegally giving us a tour (you need a permit to be a tour guide and since he is black and we are white it is assumed he was giving us a tour), yet another reminder that we need to learn the language so we can say “we are not tourists, we live here.” After a few minutes he communicated that we were friends and the man left us alone. It was so awesome and encouraging to see him again!! He was equally excited to see us and said he could not even sleep at all the night before as "I know I would see you today." What an awesome blessing to have a friend here!! We invited both of them to our place for chai once we move in and they kept asking “tomorrow we come? When?” It was difficult to explain that we will invite them once we move in and have cups and tea and maybe something to sit on. They are very eager to learn more English as we are eager to learn more culture and Kiswahili and we are praying we will build a friendship for the sake of getting to know them!!
*they really want to learn more American slang (they know some from movies), all I could think of was “you have done lost your mind,” “let’s roll” and “we be out” Any suggestions for good slang I can pass on? 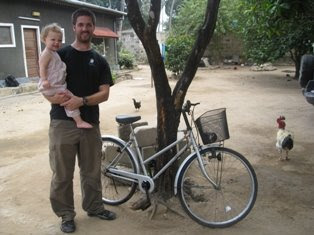 Iddi also helped Jason negotiate and find a great used bike from Japan (they are stronger and more durable then the mountain bikes from China here). Baba said "if you buy China bike maybe good one week then it will sit on roof", we followed his advice and went with the nicer used Japanese version even though the process took about 3 days of looking and bartering. Jason and Iddi negotiated the price and then got a fundi to pimp it out with a bell and a basket- check it out- we be ridin' in style!!
The funniest part was the night Jason got his bike I swore I saw Baba's son taking it oue the gate. We discovered, by some clever sleuthing, that he was indeed taking it on joy rides at night after we were in bed. It was always back in the kitchen by the morning but we thought it was a great example of the African mentality that if it is here, I can use it. He did start asking Jason if he could ride it to his friends by our last day but we had a great laugh about the whereabouts of our only method of transport.
Email Post

jill said…
yay iddi! that's awesome that you guys got to see him! say hi to him for me! (i'm sure he won't remember me though).

slang? let's see....i can't think of anything that's not inappropriate. shows what kind of high-quality convos we have here at work these days! i'll ask my upstairs neighbors for suggestions.
14/8/08 9:02 AM

Katie in Times of Spring said…
what about the ever present, always loved, "Oh snap!" or "That's salty." followed by, "Brush ya shoulders off." What about some Kiswahili slang? Mambo! Poa. Safi! And lest I forget to metion, we also have the kuku problem here in Dar, coupled with the noisy bar across the street. (They get mad at us becuase we prefer the ugali at the other bar right across the street...)
18/8/08 6:47 AM

Annie said…
I heart slang. I’ve been thinking of these all day - Catch some rays, couch potato, take a hike, knocked up, piece of cake, knuckle sandwich, love handles, no sweat, pain in the neck, catch some z’s. Let me know when you need more :)
25/8/08 12:27 PM